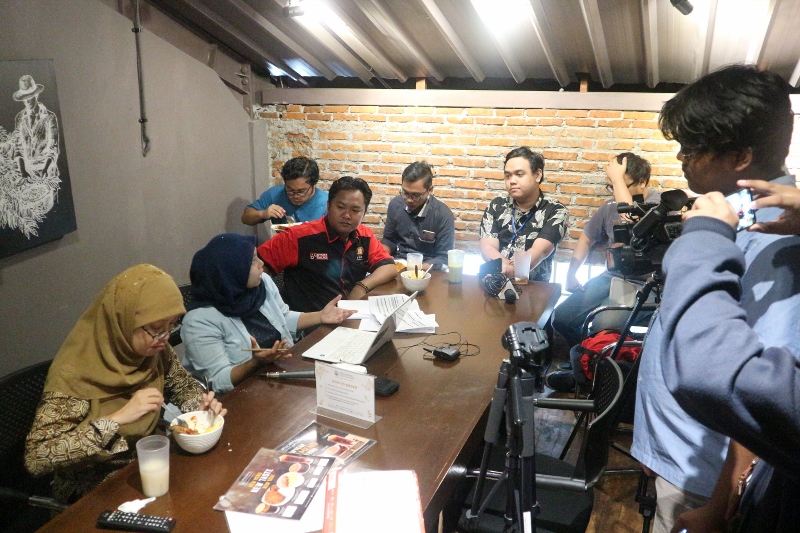 “Suspend The FTAs Ratification and Negotiations in 2019 Political Year”

Jakarta, March 14th 2019. The Civil Society Coalition for Economic Justice urged the DPR RI to suspend all discussions of the ratification process and negotiations on free trade agreements in the 2019 political year. It is due to the rush of 2019 election campaign and to push targets at the end of DPR RI 2014-2019 term which will have an impact on un-seriousness the parliaments to study, criticize and analyze the impact of the agreements comprehensively. So once again, the fate of millions people of Indonesia will be at stake.

This insistence was conveyed by the coalition through an open letter which was sent today (3/14) to the Chairperson of the DPR RI and Chairperson of the Commission VI of DPR RI (letter attached). The letter was coincided with the 7th Indonesia-EU Comprehensive Economic Partnership Agreement (IEU CEPA) negotiations which took place from March 11-15th 2019. The Coalition also reminded that some time ago the Government of Indonesia also completed two trade agreements namely: Indonesia-Australia CEPA on March 4th 2019 and Indonesia-Europe FTA or EFTA on December 16th 2018. Including at this time, the Government Indonesia is urging to immediately finalize the Regional Comprehensive Economic Agreement (RCEP) negotiations between ASEAN and its 6 (six) economic partner countries.

The Director of Indonesia for Global Justice (IGJ), Rachmi Hertanti, stated that the role of the DPR RI is very important in ensuring the Constitution mandates to protect the rights of the people to international trade and investment agreements. So that the process of people’s sovereignty within the DPR RI before Indonesia ratifies international agreements must be taken seriously in taking strategic policies for Indonesia.

The DPR RI should not only act as a stamp in the process of ratifying the FTA agreement. But before the FTA agreement ratified by the government, the DPR RI must conduct a comprehensive impact assessment, both economically, social justice, environment and human rights. This is a basis for the DPR RI before they give approval to the Government OF Indonesia to ratify it, “explained Rachmi.

Rachmi further explained that dozens of chapters and hundreds of pages of FTA agreements would not be possible to be discussed in just 60 working days. It takes a conscientious study. Because if in study the DPR RI find that international trade agreements could endanger the national interests even contrary to the social justice, the DPR RI must refuse to approve international trade agreements. This has also been confirmed in the Constitutional Court Decision No.13 / PUU-XVI / 2018.

FTA has a Direct Impact on the Life of Larger Community

Henri Pratama, from The Indonesian Traditional Fishermen’s Association (KNTI) revealed that FTA is not only a matter of buying and selling but also a matter of regulation and governance of the state. Therefore, we encourage the DPR to be more concerned as a representation of the people in an agreed democratic system.“In fact, many people have not trusted the DPR’s performance, but we still encourage the DPR to work to fight for the small and traditional fishermen affected by the FTA, one of which is salt imports, fish imports, which erodes the lives of fishermen,” said Henri.

Parid Ridwanuddin from The Peoples Coalition for Fisheries Justice (KIARA) said that the DPR must be proactive in overseeing various international agreements, in which there are investment points in the coastal areas and small islands. “Facts on the ground prove that coastal communities are victims of investment activities. Currently, the government is boosting the ten new tourism projects, of which 7 sites located in coastal areas and small islands. This project is called the national tourism strategic area (KSPN). In Mandalika, there are 300 fisher families are expelled due to tourism investment. At the same time, more than 1700 fisher families in Labuan Bajo, are also affected by tourism projects, “explained Parid.

Herman Abdulrohman, Chairperson of Kesatuan Perjuangan Rakyat (the People’s Struggle Unity), asserted that the FTA Agreement regulates protection for foreign investors, but on the other hand there are no provisions in the FTA that are designed to protect labors, especially in demanding the responsibility of the investor’s home country when the investor runs away and fled from their responsibility. “In the FTA there is a mechanism for investors to sue the state because the state does not protect investors, but there are no rules in the FTA about the mechanisms that can ask for the investors’ home countries accountability to punish their investors,”said Herman.

He further added that so far the Government of Indonesia has always targeted to increase investment by providing a lot of facilities and protection, but there is a lot of investment in the ground that comes in, mostly is an investment that is not qualified even does not have a good intention. In fact, they even behave terribly towards workers in Indonesia. “So, if they want to invest, the government’s focus should not only about providing facilities, but also about the precautionary measures when there are investors who have bad intentions and even run away,” said Herman.

Panic on Export Performance Issues, the Solution is not FTA

The Coalition considers that the Government intensively carries out FTA negotiations only to improve the export performance, this erroneous mindset built by the Government. This is because the more FTAs are signed, the more potential to open the imports door for Indonesia.

Lutfiyah Hanim, Researcher from the coalition, explained that when market access commitments were opened, the opportunity to export was not only Indonesia, but Indonesia’s economic partner countries also had greater opportunities to export to Indonesia. This means that imports are also potentially open to enter Indonesia.

“So far, the Government has never disclosed how much cost we will face from the FTA agreement. They always lured by its export potential. Including for example, the Government of Indonesia has not studied regarding any national regulations that will change if Indonesia sign the FTA” said Hanim.

Hanim added that in the trade agreement also regulates the “Rules” which contain principles or legal rules regarding how the state carries out its obligations to implement the agreement, including what the state can or cannot do in making domestic regulations. So that Hanim reminded the DPR RI and the Government of Indonesia not to be too hasty to ratify the trade agreement. Many things must be calculated strategically.

“with more FTAs being tied up, it will increasingly make Indonesia even hostage with many commitments and not free to make national policies that protect the wider state interests . Moreover, once making a commitment, later in the future Indonesia cannot reduce its liberalization level, but only raising it up. Not to mention, there is no guarantee whether when the FTA is signed, foreign investors directly invest their capital. There is no obligation for investors to do that, thus obligation were only for Indonesia ” Hanim added.