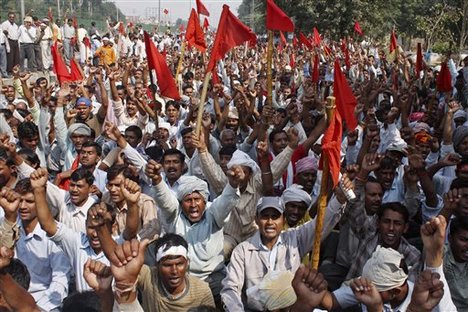 by the Forum against Free Trade Agreements

From 8-9 January 2019, ten central trade unions and several independent federations across India will join together in a historic general strike. This will manifest in transportation, banking, public services, construction and manufacturing, amongst many other sectors. Given that for the first time, agricultural workers and farmers have also called for a solidarity shutdown of rural India, this is likely to be the world’s largest general strike in terms of sheer numbers. This strike is intended to give a strong message to the National Democratic Alliance (NDA) in power at the centre. The working class is putting this regime on notice in the run up to the May 2019 general elections.

Unions calling for the strike have published a 12 point charter of demands, which includes the urgency to generate decent employment and stop contractualisation, minimum wages of not less than INR 18,000 per month for all workers, compulsory registration of trade unions within a set period and the immediate ratification of ILO conventions C87 and C98 on the right to organise and the right to collective bargaining, strict implementation of all labour laws and the need to stop anti-worker labour law amendments.

As a network working on issues related to trade and development, we believe that over two decades of neoliberalism pursued through the agenda of trade openness, de-regulation and privatisation has failed the Indian masses. As the striking unions point out – today, there has been a deepening of the crisis of decent jobs. Free trade rules, whether of the multilateral World Trade Organisation (WTO) or the new-age regional free trade agreements (FTAs) and bilateral investment treaties (BITs), all have serious implications for workers and the economy.

While 12 to 15 million people enter the job market every year, the economy is only able to provide low-end jobs to a fraction of these people. While job creation has been inadequate for many years, reports indicate that today India is facing its first known instance of an absolute decline in employment since independence.

The neoliberal policies of earlier governments produced the phenomenon of “jobless-growth” – high growth, but very low job creation. International trade deals have contributed to this situation by pushing up imports and contributing to a shift from manufacturing to assembling. For instance, out of thirteen free trade agreements (FTAs), between 2008 and 2014 India’s market share has deteriorated in eight cases and fluctuated in three. With regard to industrial products, autonomous liberalisation of imports combined with the slump in export markets of employment intensive industries such as textiles, garments, leather and leather goods and gems and jewellery have already had devastating effects on our industry, particularly SMEs and workers in the sector. Some of these sectors have seen a steep reduction of industrial activity and capacity (de-industrialisation).

The result is the inability of the Indian economy to create jobs. This phenomenon also affects the regular workforce as their bargaining power comes down drastically. A recent study shows that 82% of men and 92% of women in the workforce earn less than Rs.10,000 ($137) per month. This is in sharp contrast with the recommendation by the 7th Pay Commission based on the framework developed by the 15th Labour Conference and the Supreme Court of India. On the other hand, rising imports increases the pressure on the existing productive sectors. This intense competition is used as a justification by management to decrease wages, contractualisation of work and deny social security covers. The charter of demands of today’s strike clearly asks for a reversal of all such anti-worker policies.

Under the so-called “the ease of doing business” index and stated intention to attract foreign direct investment (FDI), the Government of India is diluting labour and environmental laws. Another policy strategy to attract more investment is to agree to more investors rights – such as providing for complaints to be brought to an international arbitration mechanism – called Investor-State Dispute Settlement (ISDS). These secret judicial systems where only private investors can bring claims against governments – for billions of dollars in awards – have been denounced for their investor bias. For instance, the public sector undertaking (PSU) Antrix had to pay the German-funded Devas 4,300 crore rupees for cancelling a satellite lease contract on strategic grounds. In Egypt, French company Veolia challenged the government for its decision to increase the minimum wage and demanded more than US$ 140 million in compensation. The GoI and several state governments in India are already facing such investor suits.

Another element that impacts workers’ quality of life is their inability to access quality essential services, such as banking, insurance, health, electricity, and education. These sectors have seen the major impetus for the reform process of the past two decades. In most sectors the reforms have failed in terms of distributive equity, access and provision of decent jobs. For instance, today, India has one of the most privatised health systems in the world with private health care accounting for 80% of outpatient care of 60% of inpatient care. The private sector is thriving and large sections of the population are forced to spend on irrational and unnecessary drugs leading to catastrophic health expenditures. Electricity is another area where privatisation and de-regulation have been spectacular failures, especially in Maharashtra, Odisha and Delhi. The Electricity Amendment Act, 2018, would cement the trend of higher prices and lower quality services. Water privatisation attempts have been marked with rising costs, inefficiencies, corruption and lack of transparency as is evident in the failed Nagpur water privatisation case. In banking, liberalisation has led to numerous rural banks shutting down. The insurance sector was liberalised with the promise of new talent, technology and finance. While the public sector Life Insurance Corporation (LIC) continues to be dominant and provide the best service, private companies have led to an increase in contract workers with poor working conditions and little recourse to unions and collective bargaining. Overall, the result is higher cost and lesser access to quality services for workers and their families. Yet, the government is currently involved in negotiations to further open the services sector with the risk of facilitating the entry and control of these sectors by multinational companies.

These are only some of the ways that India’s flawed trade and investment policies have contributed to deepen the crisis that workers are facing today. Fulfilling the demands of the 12 point charter requires a rethink of the trajectory of the Indian economy. Despite the evidence of the devastating impacts of neoliberal trade policies, the current government continues on the flawed path of deeper integration and de-regulation and is now negotiating new deals such as the 16 nation mega FTA- the Regional Comprehensive Economic Partnership (RCEP). Despite election promises in their 2014 manifesto, there is no discussion on these deals with state governments or affected citizens.

The Forum against FTAs stands in solidarity with the urban and rural workers agitating for their rights. This Government has failed in providing a new and progressive vision for the economy. It is mass organisations such as unions, peasants and social movements that are highlighting not only the inequities of the current system, but also on visions for an alternative economic model that will create decent jobs, protect workers’ rights and ensure human dignity and social justice.

Issued by: Forum Against FTAs <forumagainstftas[@]gmail.com>