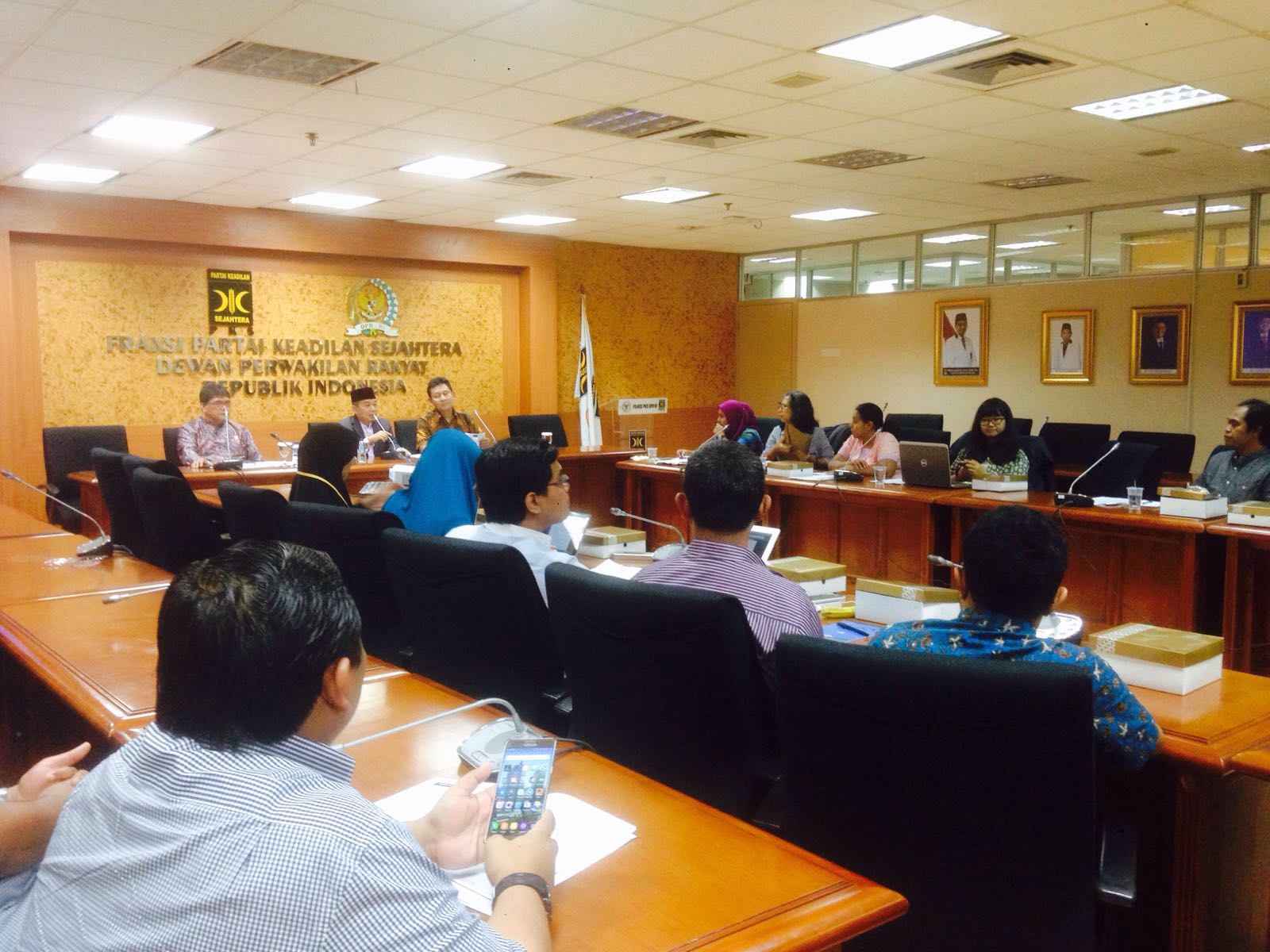 This dialogue is the first step of the agenda drawn up by the Indonesian Society #TolakTPP to meet with members of the Indonesian Parliament from across the Party in order to provide feedback on the results of the analysis of potential impacts that would be caused by the TPP to Indonesia.

The purpose of this dialogue was to urge the Parliament to reject TPP. This is because Parliament has an important and strategic role in the decision making regarding international economic cooperation of Indonesia.

On that occasion, Rachmi Hertanti, Research Manager of IGJ, delivered at least 3 potential threats that may be a good reason for Parliament to reject TPP, namely: First, TPP threaten sovereignty and democratization; Second, TPP is contradicting the aim for an independent and sovereign economic development; Third, TPP eliminates people’s access to essential public sector.

“The Disappearance” State’s ‘Policy Space’ due to the implementation mechanism of ISDS has ignored the Constitution in making policies that protect the public interest and the rights of the people”, she added.

Eri Trinurini of Kemitraan stated that Indonesia can go forward without the TPP. Only if the Government of Indonesia focus on strengthening and improving the competitiveness of the micro-scale economy which amounted to 55,586,176 business units or 98.68% of the total Indonesian business units.

Chairman of the Federation of Indonesian Workers Struggle (FPBI), Herman Abdurrahman, voice their concerns that the current mass layoffs, low wages, and labour market flexibilities will be compounded by the TPP. “Indonesia has ratified and adopted the ILO Convention into national regulations. However, in practice a violation of the right of association as well as the low-wage system still apply. The chapter on Labour at the TPP does not mean anything, because it does not contain sanctions for corporate or state when it violates the ILO Convention “, said Herman.

Another threat is also raised from the issue of seed patent. Muhammad Rifai of Indonesian Peasant Alliance (API) said that the TPP is a top-down policies of the elite without considering the peasantry. TPP requires States to ratify the 1991 UPOV related to patent protection for seed varieties. TPP will threatened Indonesia’s seed breeding because of foreign corporate’s interests who want to monopolize seed knowledge.

PKS’s View on Threats of TPP

PKS is one of the party which has 40 seats in Parliament. The party has a mission and a strong commitment to strengthen Indonesian nationalism through strong alignments to the people. This was confirmed by the Chairman of the PKS faction, H. Jazuli Juwaini, who explained that the PKS has been pushing a concept of international economic cooperation that is based on justice and mutual benefit to the Indonesian people.

“PKS has a similar view of the Indonesian civil society towards the TPP. An international cooperation made by the Government should not as an economic cooperation based on exploitation and sell our nationalism”, he said.

On that note, the PKS faction expressed support to the movement against TPP and expected that this movement could be a big flow of changes for the nation. He hopes that this refusal of TPP can be the position of all parties in the House of Representatives, even should be a cross-commissions strategic discussion.

The Strategic Role of Parliament Against TPP

The House of Representatives has a strategic role in the rejection of the TPP, so that the control and legislative function of Parliament can be used optimally in order to protect the public interest and the rights of the people. The final decision is in the hands of the House. Especially after the TPP was signed on February 4, 2016, the TPP has not yet been ratified by the member States due to the rejection of its Parliaments Members to the TPP. Seeing this, Indonesia’s Members of Parliament should also issue a policy statement on the rejection of the TPP agreement in Indonesia.