Mr. Ir. Joko Widodo
The President of the Republic of Indonesia

Mr. Muhammad Lutfi
The Trade Minister of the Republic of Indonesia

Mr. Budi Gunadi Sadikin
The Health Minister of the Republic of Indonesia

Ms. Retno L. Marsudi
The Foreign Affairs Minister of the Republic of Indonesia

Mr. Dandy Satria Iswara
The Indonesian Ambassador to the WTO in Geneva

To whom it may concern

We are writing to the honorable ladies and gentlemen regarding WT/MIN(22)/W/15, which contains Draft Ministerial Decree regarding the TRIPs Agreement. This draft decision is in contrast and far from the original TRIPS Waiver proposal proposed by South Africa and India in October 2020 and the revised version in May 2021 (IP/C/W669/Rev.1). Indonesia is a co-sponsor of this proposal.

This proposal is motivated by the awareness that there is a need to diversify the production and supply of medical devices. However, it is crucial to facilitate and sustain socio-economic recovery and eliminate the development of severe infections or deaths. Yet after more than two years of COVID-19, there is a massive gap in access to vaccines, diagnostics, and therapies.

We acknowledge and appreciate the Indonesian government’s role in the text-based negotiations thus far to improve the text under negotiation. We note some improvements

In this letter, we highlight several fundamental points:

If this Draft Ministerial Decree is to be adopted, the above changes are essential.

However, we emphasize that the draft Ministerial Decree is significantly lacking than what is needed for the production and supply of devices needed during a public health emergency such as COVID-19 therefore Indonesia should also consider rejecting the Draft Ministerial Decree and instead call for a comprehensive settlement waiver as initially proposed in IP/C/W/669/Rev.1.

We believe this is our perspective. We hope that you can consider our perspective as an effort to save many patients and help restore the economy. Thank you for your attention.

Those who co-signed this letter:

The Negotiations Does not Proceed with People’s Will, the 12th Ministerial Conference of WTO and Free Trade Agreement Must Be Stopped! 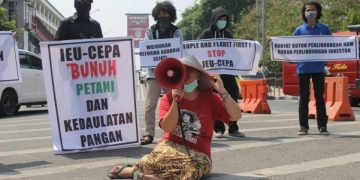 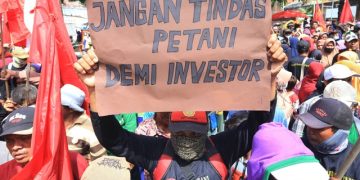 The Negotiations Does not Proceed with People's Will, the 12th Ministerial Conference of WTO and Free Trade Agreement Must Be Stopped!