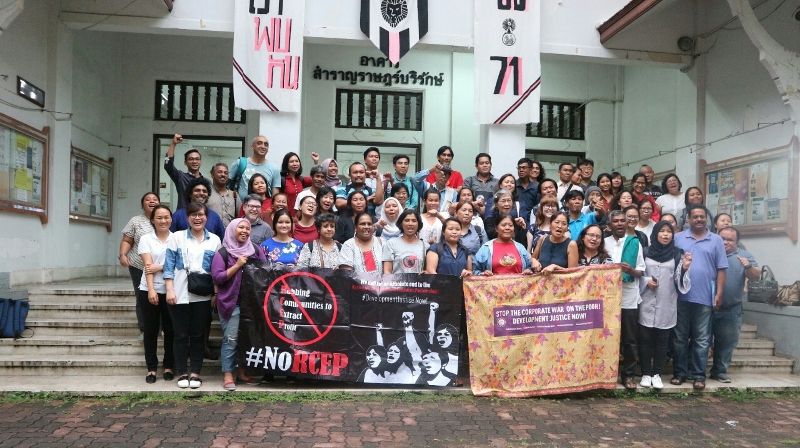 Meanwhile,  the  CSOs  representatives  intervened  in  the meeting with  the  RCEP negotiators on 23 July 2018 were Rachmi Hertanti from Indonesia for Global Justice (IGJ), Dinda Nuur Annisaa Yura from Women’s Solidarity, and Nibras from Peoples Coalition from Fisheries Justice (KIARA).

Some  of  the  demands  from  civil  society  group  is  pointed out  to the  hot  issues became the public concerns regards to the RCEP negotiation, such as public participation  issue  in  free  trade  negotiation,  food  sovereignty  issue,  investment issue in relation to the ISDS mechanism and land grabbing caused by investment, gender issue, and sustainable development issue.

Critics on investment chapter in RCEP leads to the exaggerate protection to the investor, and give a space for the investor to sue the State using ISDS (Investor-State Dispute Settlement) mechanism. Besides, the openness of foreign investor on the vital sector could be lead to the exploitation of natural resources in Indonesia. Thus, in this RCEP negotiation, the negotiators should not take the rules that harm peoples and state in relation to the investment chapter.

Executive  Director  of  Indonesia  for  Global  Justice  (IGJ), Rachmi Hertanti  stated  that there are some red lines should be noticed by the negotiators related to the investment chapter on RCEP. “3 investment issues that became the red lines for negotiators are ISDS rules, performance requirements and export taxes in relating with unprocessed materials. Those kinds of things could not be submitted on RCEP. If negotiators insisted to submit those red lines rules, so RCEP should be rejected”, Rachmi affirmed.

Rachmi explained that the mechanism of foreign investor sue the State or known as Investor-State  Dispute  Settlement (ISDS)  will only  contradictory  with  Constitution and National Policy, and will increase the risk of the function of State control to protect  national interest  and  become  the  deterioration  to  promote  and  protect human rights in Indonesia.

“We  urge  the  Indonesian  negotiators  to  stand  in  their commitment  to  review  ISDS that put people’s protection than foreign investor rights. Indonesia has had experiences sued by foreign investors for 8 times using ISDS mechanism. And the Government of Indonesia has been realized that the ISDS will eliminate the state policy space and put aside the Constitution. Therefore, if RCEP insisted to submit the rules of investor protection and ISDS, then it will become the regression of progressive process has been done by the Government of Indonesia since 2012 in reviewing ISDS rules,” Rachmi explained.

Point performance requirements on investment chapter also become the important note from IGJ for RCEP negotiators. In which, this rule becomes important for the development strategy of the Indonesian national industry. IGJ urged the RCEP negotiators to give respect for developing country, especially Indonesia, to keep implemented the restriction policy on majority foreign ownership, the restriction of using foreign labour on some key position, apply local content requirements (such as the use of local natural resources and labour), and establish export restriction \s on raw materials in mineral commodities.

“These   regulations   are   important   instruments   to   ensure   that   the   incoming investment will effectively contribute to the national development that aimed to increase competitiveness, value added of local industry and increasing local jobs in Indonesia”, Rachmi concluded.

Realizing an Equitable and Equal Trade

Indonesian civil society also urged to realize an equitable and equal trade including for women based on cooperation and solidarity principal, in which the people’s needs and participation become the main spirit. During this time, the system of economy  and  trade  has placed women  experiencing  layered  discrimination  and marginalization.

The  Coordinator  for  National  Program  of  Women  Solidarity, Dinda  Nuur  Annisaa Yura stated that RCEP will sharpen the gap and injustice for women. One of them is on the wage gap aspect. “The wage gap between women and men in Asia is one of the highest in the world, with an average of 20%. In the other side, there is various wage gap in the RCEP countries, from 3% and up to 60 %”, Dinda stated.

“Investment chapter on RCEP will make the Government could not be united in applying provisions  and  legal  action,  including alternative  action  to  rectify  this gender gap,” she added.

Moreover, foreign investment has been also entered the water sector in Jakarta and impacted   to   the   loss   of   people’s   basic   right.   “We   should   learn   how   water privatization  in Jakarta  caused the  violation  of  people’s  right  to  water,”  Dinda affirmed.

Price of the water is expensive, with the quantity in which is sometimes and often small or even no water at all, and the water quality is bad. This then gives the layered problem for women who take the role in ensuring the water needs for their family. Besides, the bad water also influences the health of women’s reproduction.

Dinda also expressed a deep concern for RCEP. She assumed that all free trade agreement  has  no  commit  to  peoples,  especially  the  most  vulnerable  groups including women, will only bring the country’s condition like Indonesia, into the poverty, human rights violation, and the loss of people’s sovereignty, especially women. “For most people, RCEP might only talk about cost and benefit, about selling and buying, about letter and number. But for most of the peoples, especially for women, it talks about life or death,” she ended.

Foreign Investment Grab the Rights and Welfare of Small Fishers

In  fisheries  sector  and  foreign  investment  in  relation  to  the small  fishers’  welfare, Nibras Fadhillah from People’s Coalition for Fisheries Justice (KIARA) expressed that in Indonesia, there are more than 8 billion small-scale fishers household who get the negative impact from RCEP. This is due to, RCEP will give more space for foreign investment in fisheries, coastal and marine resource that will increase the potential conflicts between big industrial fisheries company and small-scale fishers and coastal communities.

The openness of investment on fisheries and marine sector will also be impacted to the small-scale fishers’ livelihood taken by foreign investors and private sector, that will cause many of small-scale fishers should change their jobs. This is because of, the foreign investor will only improve the potential of the deprivation on fishers’ life,  in  terms  of  construction  artificial  islands (reclamations),  construction  of tourism industry, mining and other extractives activities in the coastal areas and small islands,” Nibras explained.

RCEP will only create the worst life for small-scale fishers. Because the policy will be bind and aligned to the foreign investor and private sector to expand market liberalization. The groups of local small-scale fishers will face difficultness because in the end they will be forced to facing foreign company or private sector both in the domestic or export market. Moreover, the negotiation on rules of origin (ROO) in RCEP will do not give small-scale fishers gain a profit in international trade. On the contrary, it will open a space for foreign flag vessel to catch fishes in Indonesian water,” Nibras affirmed.

Nibras also stated that RCEP will change the mechanism of food sovereignty into the commercialization. And exploit much more marine and fishery resources. Due to these reasons, we remind to all countries involved in RCEP, especially Indonesia, to make policies that will not bring a negative impact for small-scale producers, but more  to  strengthen  the  control  of  a  better  sustainable  marine  and  fisheries resources. Also, prioritizing the sustainability of small-scale producers and protect food sovereignty in the country,” Nibras stated.

Access to Medicine Issues In The People’s Forum Brussels

Access to Medicine Issues In The People's Forum Brussels