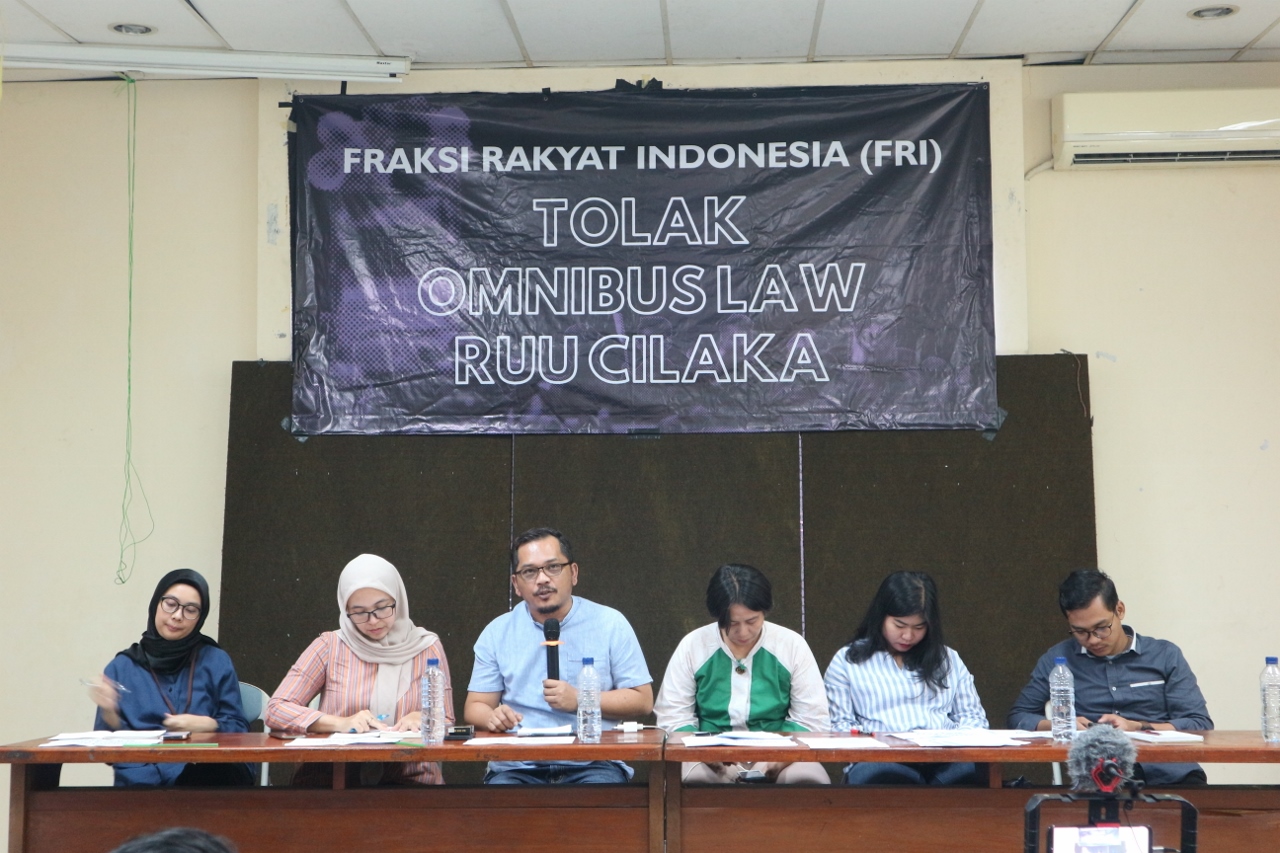 The Indonesian People’s Faction (FRI/Fraksi Rakyat Indonesia), a combination of various groups and civil society organizations, views the process of drafting and the substance of the Draft Omnibus Law on Job Creation (the Cilaka Draft Bill – Cilaka stands for Cipta Lapangan Kerja or Job Creation) killing democracy upon politic, economic, ecology, and rule of law. The Cilaka Draft Bill was born out of the country’s political policies which neglect the People’s Sovereignty as the highest sovereign. Therefore, Omnibus Law cannot be viewed narrowly as a process of mere regulation. However, more broadly than that, the Cilaka Draft Bill was born due to the political system in Indonesia which served the interests of the oligarchy.

A political system which does not reflect democratic values results in neglectful leadership of the people. As many as 45 percent or 262 people out of a total of 575 members of the Indonesian Parliament are business people or entrepreneurs elected through the General Elections (Elections) can cause conflicts of interest, specifically in making regulations. Thus, the resulting regulations reflect business interests more than those of the people. The 2019 Election Drama which was full of segregation among supporters of the Election contestants led to the strengthening of the party supporting the government and almost no opposition in Parliament. This indicates that the distribution of power is far more preferred rather than guarding democracy. In such a political situation, the Omnibus Law of the Cilaka Draft Bill was pushed into being a regulation which ruffled the economic democratic system and was more capitalistic in nature. The regulation provoked damage to the ecological, economic and social chains.

Moreover, the legal order is meaningless since the Cilaka Draft Bill is against the constitution. In fact, a nation of laws requires that state conduct always be based on law. State decisions that are made and have a broad impact on public affairs must not only be limited by legal mechanisms, but also require decision makers to provide a political space to encourage discussion of the decision to be criticized, given input, or even rejected. All the closed talks in the drafting of the Cilaka Bill, and even tend to be hidden, must be stated as an act of the state having bad intentions and behind it there is always a crime which follows.

After studying the process and substance of the draft, the FRI concluded the Cilaka Bill was a political decision made “from the elite, by the elite, and for the elite e “. In mid-2019, President Jokowi was intensively meeting with the Indonesian Employers Association (Apindo / Asosiasi Pengusaha Indonesia), the Chamber of Commerce and Industry (Kadin), and the World Bank at the State Palace in which they discussed increasing investment and exports as a way to improve the trade balance deficit and the current account deficit. During the meeting, Apindo proposed changes to the Manpower Act under the pretext of creating jobs. Whereas the World Bank, as stated in its work report, also proposed changes to labor regulations including the matter of wages, severance pay, and the ease of recruiting and firing workers.

The proposal of businessmen and neo-liberal economists from the World Bank was immediately obeyed by the government by forming the Omnibus Law Task Force consisting of 127 people, of whom the majority was entrepreneurs and business people without any affected people’s representatives, for instance workers. The task force led by the Head of the Chamber of Commerce and Industry was given the privilege to perform an inventory of problems, provide input, and conduct public consultations. The results are predictable. The substance of the Cilaka Draft Bill only contains a variety of benefits for the elite ranging from reducing corporate taxes, eliminating criminal sanctions, to brutally ease of exploiting the working class and the environment.

The granting of over-broad authority to the executive, in this case the President of the Republic of Indonesia, in the Cilaka Draft Bill, injures the power sharing system as a prerequisite for a democratic state. Legislative, executive and judicial powers must be balanced and equal in accordance with the constitution; hence there is no arbitrariness in the administration of the state. This was violated in the Cilaka Draft Bill as in Article 170 where the government has the authority to amend laws with Government Regulations, to accelerate strategic work copyright policies. That means the executive wants to position themselves above the legislature. Moreover, the government wants to take over the authority of the judiciary, because the authority to review the law is in the judicial domain.

In addition, simplifying licensing in the Cilaka Draft Bill by eliminating many licensing instruments closes the checks and balances space of the judiciary to review executive administrative decisions. The transfer of authority, especially licensing from the regions to the central government, also damaged the spirit of decentralization, which is one of the key concepts in the constitution of the Indonesian amendment. By returning to the centralized system as in the New Order era, the space for community participation in the regions will be immensely difficult and public services will also be ineffective.

The substance in the Cilaka Draft Bill brings Indonesia back to authoritarianism and centralization. The 1945 Constitution has provided regulations regarding the division of authority between the center and the regions. In essence, the emergence of regional autonomy is a response to the political, economic development and socio-cultural imbalances which accompanies central and regional relations throughout the New Order era. As a result, the emergence of the Omnibus Law upon the Cilaka Draft Bill has damaged the spirit of regional autonomy, thus we will return to the crippling authority which Indonesia has been trying to overcome since the fall of the New Order.

While the 1945 Constitution Amendments (I-IV) intend to limit the power of the president which is too absolute in the Republic of Indonesia, since historical facts have proven that the presidential authority that was massive in the old order and the new order era had an atrocious impact and even dangerous for the existence of the nation and having a state, through the Cilaka Draft Bill the power of the president of Indonesia becomes excessive. The President is as powerful as he is an emperor, where every authority that had been distributed to other institutions and local government was eliminated and piled up in his hands.

In its journey, environmental permits have also become a tool for community participation in development, moreover in maintaining their living space. In the field of labor, for example, the Cilaka Draft Bill eliminates wages for leave when sick, menstruating, unable to work because of the necessities of getting married, marrying their children, circumcising, baptizing their children, even if a family member in a house dies. In fact, the emergence of this provision in the Manpower Act is a long struggle of workers in demanding the presence of the state in the relations of workers and employers who are unequal in their bargaining positions.

Second, the Cilaka Draft Bill also authorizes the President to cancel the Regional Regulation. In fact, the struggle of the community for the recognition of indigenous peoples resulting in the Constitutional Court Decree 35/2012 was only felt in fact after the verdict produced regional regulations on the recognition of indigenous peoples. Providing the Cilaka Draft Bill is passed, local regulations on the recognition of indigenous peoples who have been fought for will be under threat, especially if it is judged to hamper the investment. Third, the community has postponed a number of inconsequential legislation, culminating in the #ReformCorruption movement which has delayed the problematic articles in the Land Bill, the Mining of Mineral and Coal Bill, the Draft Statute Book of Criminal Law and the Labor Bill. Many of these problematic articles reappear in the Cilaka Draft Bill, for instance, the provisions for extending the life of a mining concession to “the existence of the mine,” the extension of the Cultivation Rights and Building Rights periods, the ease of layoffs, and others.

The Omnibus Law of the Cilaka Draft Bill does not overcome the problem of stuck bureaucratic reform. The government wants to accelerate the entry of investment by cutting licensing included in the substance of the Cilaka Draft Bill. In the last 9 years, bureaucratic reform has been conducted through Presidential Regulation number 80 of 2011 concerning the Grand Design of the Indonesian Bureaucratic Reform 2010-2025 (vide Perpres 80/2011). However, the implementation is still far from expectations. Bureaucratic reforms that have been built with various improvements in government governance, organizational strengthening, and development of control mechanisms, and administrative management in all sectors have actually begun to be stripped down one by one since 2014 with the issuance of regulations which contradict higher regulations. Disruption of bureaucratic reform is most evident in the field of environment and natural resources. In a few years, the last cut in environmental licensing has been done. In fact, the problem is not in the environmental permit, but in the bureaucracy. Based on research, a problem in the environment that often occurs is bureaucracy with no integrity. For example after elections there is usually a significant increase in the issuance of permits indicated by corruption, collusion, and nepotism (see the case of the Governor of Southeast Sulawesi – Nur Alam 2018, and Regent of Buol – Amran Batalipu 2013). Instead of strengthening the integrity of the bureaucracy, law enforcement, and increasing the quantity and quality of State Civil Apparatus, the Government actually causes more problems by eliminating environmental permits in the Cilaka Draft Bill.

From an economic standpoint, the substance of the Draft Omnibus Law of the Cilaka Draft Bill does not guarantee that it will attract investment, let alone the welfare of the people. Previously, the Government of Indonesia had granted privileges to investors or corporations through the Bilateral Investment Treaty (BIT) Agreement. However, it does not make investment enter Indonesia. The provision even becomes a threat to the country’s sovereignty, environmental damage, exploitation of natural resources, and does not bring prosperity to the people. In the Cilaka Draft Bill, it will repeat the same thing and increasingly bring adverse impacts on the Indonesian economic climate. In addition, the Omnibus Law will further widen Indonesia’s trade balance deficit. That happens due to investors who invest their investments automatically require imported raw material products to run their production. Indonesia’s trade performed a deficit due to countless imports. Recorded in 2018, there was a trade deficit of 8.6 billion US dollars and 2019 of 3.20 billion US dollars dominated by non-oil and gas imports. The dominance of imports will annihilate local products which automatically give a negative impact on people’s welfare.

The Omnibus Law of the Cilaka Draft Bill actually impoverishes workers who sustain the course of investment through labor flexibility and worsening working conditions. In the draft bill on Cilaka, labor flexibility that illustrates the ease of recruiting and lay off workers is included in the article on unlimited contract status, the elimination of wage and layoff protection, as well as severance pay cuts. Working conditions are also exacerbated by the article on productivity, long working hours including the addition of overtime hours, compensation for lost leave compensation including sick leave, getting married leave, worship leave or religious holiday leave, and performing trade union duties, while on the other hand fines and criminal sanctions for employers are abolished or reduced.

About the Indonesian People’s Faction (FRI)

Download >>>Statement of Attitude on the Draft Omnibus Law