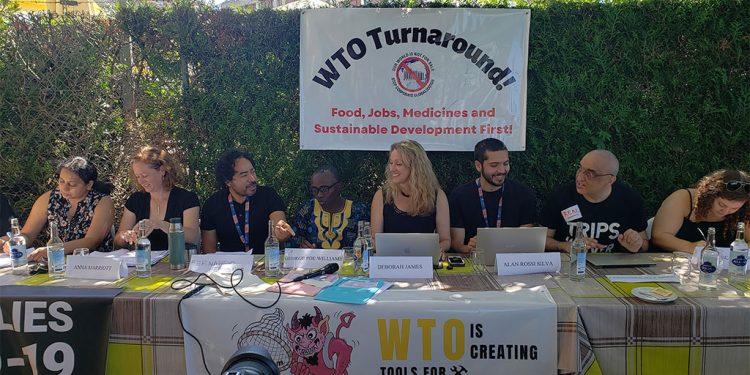 More than 50 NGOs from around the world object to repressive tactics from the World Trade Organization (WTO) restricting their access to the WTO Ministerial Conference in Genèva, including the last-minute withdrawal of access to the WTO building on the opening day. They view the WTO’s decision to target NGOs and lock them out of the opening day as part of a further de-democratisation of the organization and distancing itself from civil society groups even as it has further welcomed large global corporations. The latter are routinely welcomed in the WTO at places and times where and when civil society groups are refused access.

Three days prior to the convening of the Ministerial Conference in Geneva to be held at the WTO premises on 12th June, NGOs were informed that their previously granted access on the first day was retracted due to “unexpected security-related reasons”. Even after repeated asking, these ‘reasons’ were never shared, much less explained or justified. After problematic experiences also at the last WTO ministerial in Argentina in 2017, civil society groups fear that such exclusions are becoming a permanent, and perhaps worsening, feature during this and coming Ministerial Conferences.

A civil society representative set to attend the Ministerial Conference is Richard Hill from Association for Proper Internet Governance (Switzerland):

“As a Swiss citizen, I am surprised, disappointed, and outraged that I will not be allowed to enter the WTO premises for the opening of the WTO Ministerial meeting on Sunday, even though I am a registered and accredited civil society representative to the meeting. This is particularly surprising for a meeting held in Switzerland, which has a long and robust tradition of consulting and listening to all concerned parties, in particular civil society.”

Parts of the NGO sector did, however, face grave restrictions when gathering at the last, 11th, Ministerial Conference in Buenos Aires, Argentina in 2017. Then, many civil society organizations were not even given access to the country. One of the CSO representatives who was denied access in Buenos Aires, Sofía B. Scasserra (Instituto del Mundo del Trabajo, UNTREF, Argentina) is again facing restrictions to a WTO Ministerial Conference:

“Four years ago, many in civil society were left out of the Buenos Aires Ministerial, showing how undemocratic it is and how it makes decisions behind the people’s backs. Today we hear that civil society would not be let in on the first day, for reasons not explained to us. I thought it would be different here, but it is the same story repeating itself. We fear that the WTO is now normalising this process of excluding civil society from its processes, while businesses are embraced more and more by it. This is completely unacceptable and goes against the interests of the people in whose name the WTO convenes.”

Olisias Gulthom, from the civil society organization Indonesia for Global Justice, sees the retraction of civil society’s access to the meeting on Sunday as a further move of shrinking policy space for certain groups:

“Tactics towards civil society organizations mirror the Director General’s Green Room talks and bullying towards many developing countries at MC12.”

This exclusion of civil society presence by the WTO is completely unacceptable. 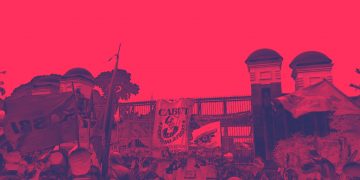