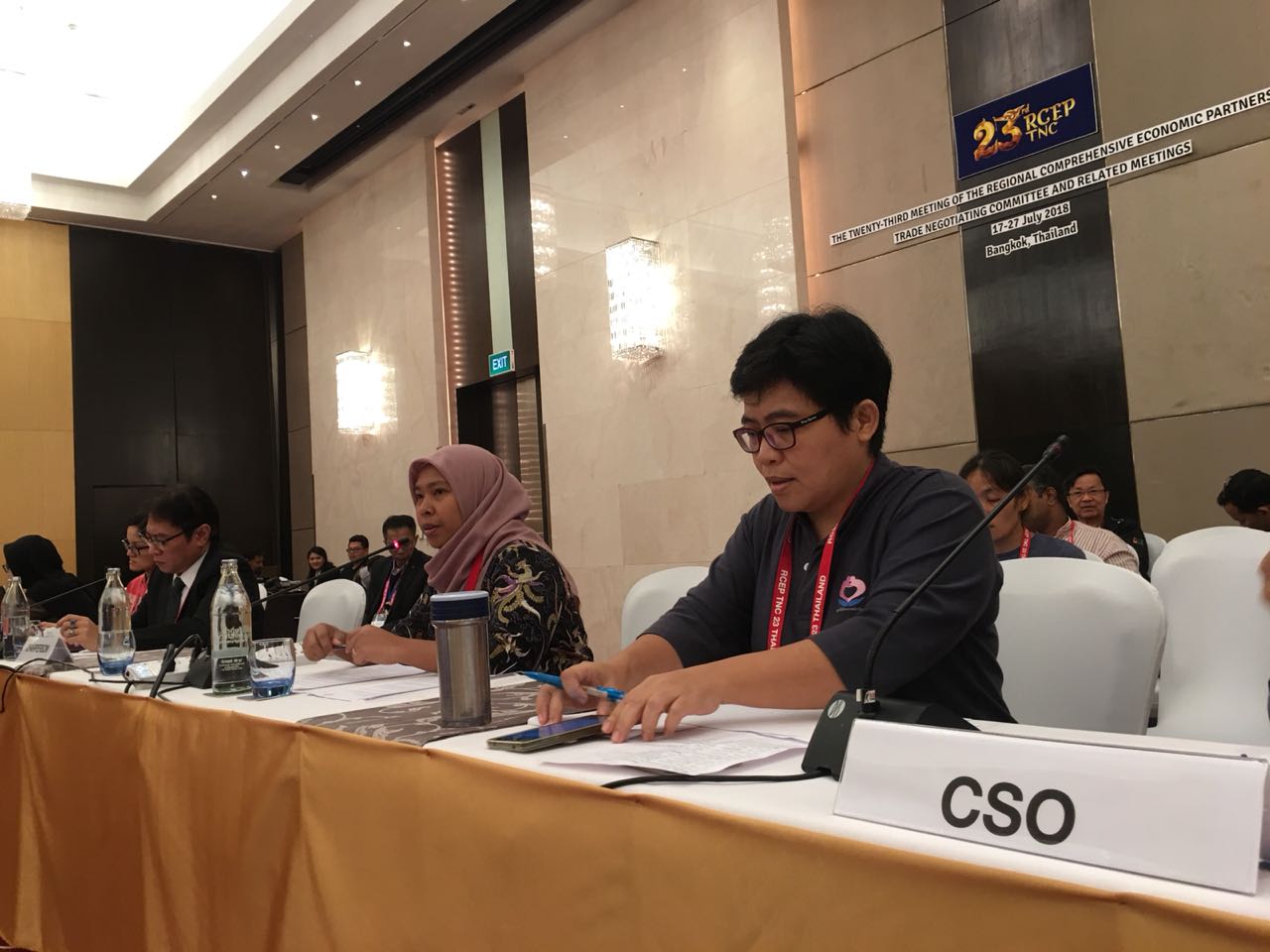 Thank you Mr. Chair person, and all Trade Negotiating Committee for your time. My name is Rachmi Hertanti, I’m from Indonesia and working with Indonesia for Global Justice, an organization who have concerns on the impacts of free trade agreements and investment treaty to the rights of people. On this occasion, we would like to convey some of the “red lines” that cannot be crossed in the negotiations related to the investment provision in RCEP.

First, on the provision of Investment protections and ISDS. The RCEP must strictly curtail  the substantial and procedural rights of foreign investors commonly granted in investment chapters of trade  agreements. “No ISDS” in any form is the only sure way to avoid multimillion dollar claims and ensure the protections of People’s Rights.

We are thus fully convinced that the inclusion of investment protection with ISDS mechanism in the RCEP would undermine Constitution and national regulations. Investment Protections provision under RCEP will raise the risk of regulatory function of the State to protect the national interest and the setback to the promotion and protection of human rights. Even the investment protection agreement also proven not being able to guarantee of increasing on the investment value. A recent study by the OECD found that there is no evidence for a positive correlation between FDI and investment treaties (http://dx.doi.org/10.1787/e5f85c3d-en). In fact now, many countries are criticizing the ISDS mechanism. We heard that some countries gave a strong critical voices on ISDS in UNCITRAL Meeting in New York on last February. There were: Indonesia, India, Thailand, and even China. And, now, the New Zealand government has also announced its opposition to ISDS mechanisms.

The provision of investor protections and ISDS in RCEP will be a setback for the progressive process undertaken by the Government of Indonesia since 2012. Under the review process, Indonesia is demanding to address the problems not only on procedural rules on ISDS but also on substantive rules under the investment treaty, such as the narrowing down of Investment definition, exception in the scoping, limitation on Fair and Equitable Treatment, exception in MFN and National Treatment, Expropriation, including to put investor obligations. Therefore, we urge the negotiators of Indonesia to keep its commitment on ISDS Review which put people’s rights over investor rights.

Second, on the provision of performance requirements. We urge the negotiating parties to not include any provisions under RCEP that will limit the state’s capacity to regulate and take measures in their industrial policy and protecting the People’s interest. In relation to that, Indonesia must remain at liberty to set performance requirements, including  to set limitations on  foreign  (majority)  ownership, limitations on foreign workers in key positions, implement local content requirements (such as use of local resources and workers), and set export limitation on raw materials in mineral commodities. Such regulations are vital instruments to ensure that incoming investments effectively contribute to national development trajectories aimed at enhancing competitiveness, added value of local industries, and boosting local employment. The RCEP must respect developing countries and especially Indonesia to remain full policy space to prioritize local production to reduce rural poverty and improve the welfare of local farmers and fisher folk, and, if necessary, impose import tariff and quota for sensitive agricultural and fisheries products.

Third, No restrictions on Indonesian Export Tarrifs on Raw Unprocessed Materials. The RCEP should  refrain  from  targeting Indonesian export measures aimed at promoting domestic processing of raw materials. Such measures aim to enhance domestic value added  that will support the  development of local downstream industry and help reduce unemployment and poverty.

And Final, we ask the RCEP negotiators to ensure that the RCEP text does not crossed these red lines.*

Is the Executive Director of Indonesia for Global Justice (Email:igj@igj.or.id)