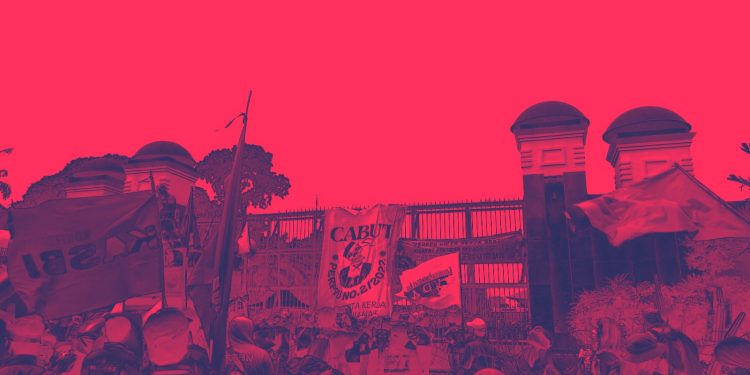 KEPAL (The committee of Constitutional Rights Defence), GEBRAK (Labour Movement with the People), KNPA (National Committee for Agrarian Reform), and together with all the people’s movements in Indonesia, would like to ask all international networks solidarity for the People of Indonesia.

Today, 10 January 2023, the Indonesian People’s Movement took to the streets to stage a massive protest in front of the Parliament Building urging for an ultimatum and demands from the people of Indonesia to the President and Parliament to immediately revoke PERPU No. 2 of 2022 concerning Job Creation.

In solidarity with the struggle of the people’s movement in Indonesia, please share widely the people’s ultimatum below that will be brought in the big demonstrations of the Indonesian People’s Movement:

If within the next 7 days these demands are not met, we call on all Indonesian people, who have been trampled on by the arbitrariness of the President, to carry out civil disobedience and lawful mass actions; to reject the PERPPU on Job Creation which causes legal demoralization of investment interests.

This step is a form of protest with no other option, other than demanding the repeal of the PERPPU on Job Creation and as a stern warning against actions taken by the President / Government who impose their own will. The PERPPU on Job Creation with all its perspectives is only carried out for the interests of elites group by straddling the law and the decisions of the Indonesian Constitutional Court.

Civil disobedience will continue to be carried out by the people, as long as the betrayal of the constitution is still defended by the President and the House of the Representatives of the Republic of Indonesia.

In the name of the People of Indonesia: