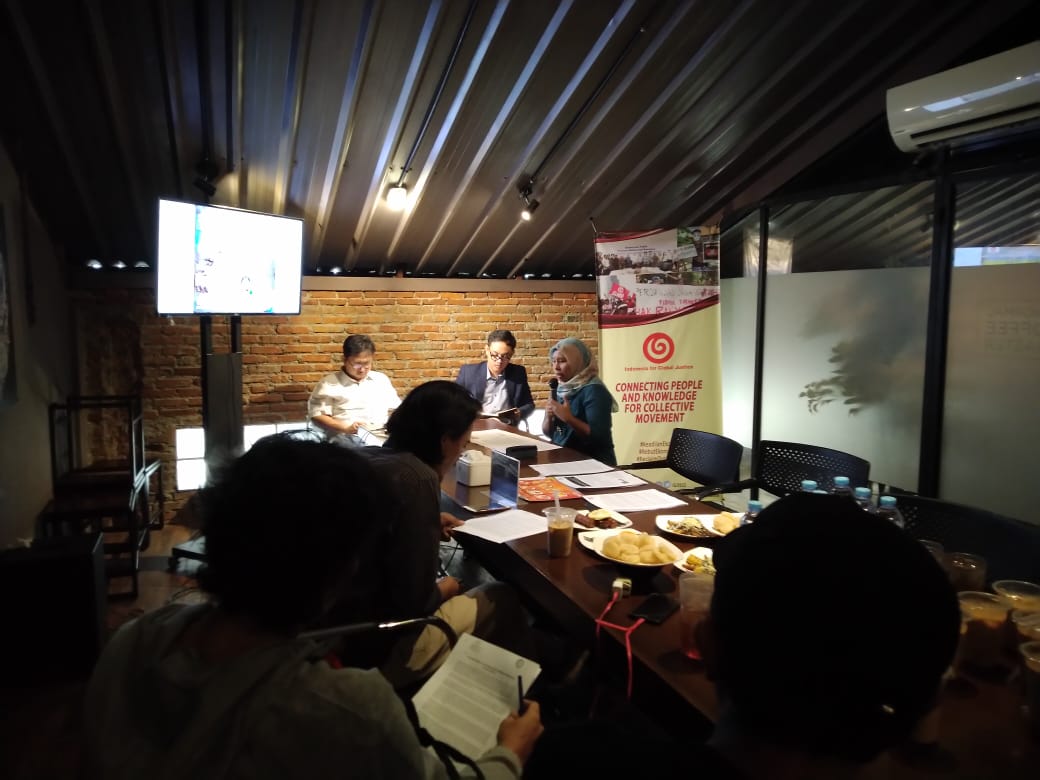 This was conveyed during a discussion session on “Under the Shadows of Trade Wars & Prolonged Threat Deficit”, held by IGJ in Jakarta (18/6). This discussion was held in conjunction with the momentum of the Indonesia-EU CEPA negotiations on 17-21 June 2019 in Jakarta.

Executive Director of IGJ, Rachmi Hertanti, explained that the Government of Indonesia’s strategy was very reactive in resolving the trade balance deficit problem. The addition of 12 free trade agreements, both bilaterally and regionally, is not the right answer to increase the value of Indonesian exports. By opening the market through FTA is indeed possible to open up greater export opportunities, but it does not mean that it is able to increase the value of exports by itself.

“Increasing exports but only by capitalizing on commodities with low added value will be very difficult to utilize the existing market potential. Moreover, by opening the market access in FTA agreement by setting a 0% tariff at almost 100% of the tariff posts also unlock the potential threat of increasing the import value. Anticipation schemes are also needed. So, in the future the government of Indonesia must reform trade policies structurally, and not only a short-term reactive strategy, “explained Rachmi.

Rachmi urged the government of Indonesia to not only talk about exports but also to formulate a strategy for Non-Tariff Measures (NTMs) which must be strengthened to become a strategy to deal with the onslaught of imports. The government needs to develop NTM’s strategy that can protect the use of domestic products in national economic activities without having to fear that we will be sued at the WTO. Industrial countries are implementing more NTMs compared to Indonesia, and even they’re the ones who suing Indonesia for many times”, Rachmi added.

Rachmi also added that the rules in the FTA agreement must not become a boomerang for the demise of the local industry. This is because there are many FTA rules that ultimately limit the government’s policy space to formulate policies in strengthening the local industries. Therefore, IGJ urges the government of Indonesia to have a negotiating position that can strengthen the local industry which is not negotiable such as local content requirement policy (TKDN), limiting the export of raw materials, the obligation to transfer technology and ensuring the implementation of rules flexibility in the IPR, limiting the opening of market access for government procurement on goods and services, removing the rachet and standstill  mechanism along with other mechanisms that limiting the state policy space, limiting the application of performance requirements, and remove the ISDS mechanisms;

In the discussion, IGJ’s Researcher, Hafidz Arfandi, said that there were 2 (two) factors that made Indonesia continue to be overshadowed by the trade balance deficit which was predicted to worsen from year to year, namely, First, the import value increased significantly; and Second, exports of low added value of extractive commodities based are, raw, and semi-finished.

“We have a fundamental problem, namely industrial competitiveness. The aggression of FTAs carried out by the government is supposed to be accompanied by three important things; First, increasing domestic production capacity, especially manufacturing-based ones. Second, Consideration of commodity competitiveness in the global market, Third, Anticipatory scheme to manage the expansion of imports into the domestic market. Without it all, the aggressiveness of the FTA will only be a grave for Indonesia”, said Hafidz.

Hafidz further explained, by referring to Revealed Comparative Advantage (RCA), the competitiveness of Indonesian commodities in the world’s main markets is still less than 1 or below the global average, where at least to be a competitive market player at least the RCA value must be more than 1 and the higher the value, the better.

From the list of 19 Indonesian commodities that have RCA values above the world average (> 1) only 4 commodities, namely Palm Oil which in 2012 at 4.39 dropped to 3.97 in 2016, Footwear rose from 1.50 to 1.72, Coffee, tea and spices which fell from 1.49 to 1.32 and tin 5.66 to 6.66. While other commodities are far below 1 (<1), which means it is difficult to try to expand the market significantly. Even some experienced a downward trend including fuels, Chemical Products, Apparel, Furniture, Iron and Metal Raw Materials, Processed Wheat and Steel.

“looking at Indonesia’s RCA values in export destination countries shows that the majority of Indonesia’s RCA values are still below the number 1 (<1), which means that Indonesia’s market share is still below the global average market share. Therefore, the government’s efforts to boost exports to non-traditional markets such as the zones of Africa, Central Asia, and Latin America, are still questionable in their success without any structural improvements in Indonesian trade policies, especially related to the diversification of trade commodities other than raw, semi-finished and extractive goods”, said Hafidz.

Therefore, the aggressiveness of FTA that carried out by the Government of Indonesia needs to be accompanied by a comprehensive impact study to calculate the potential that can truly be utilized by Indonesia.

It should be mandatory for  both parties from the executive element (when conducting negotiations) and the legislature (when ratifying) review whether the plan to open a free market through FTA, PTA, CEPA and so on with various countries both bilaterally and multilaterally through ASEAN has really provided benefits to Indonesia and definitively identified risk mitigation against the results of the agreement in three areas; monetary space (depletion of foreign exchange reserves to the fall of the exchange rates), fiscal (disruption of tax revenues), to trade-offs against the opportunity of industrialization which made the de-industrialization process run more massive, explained Hafidz.

Build import substitution based industries, especially those that strengthen the supply chain based on local community products

The government of Indonesia is targeting Indonesia’s export performance growth in 2019 to reach 5.5-6.6% (year on year). Even the Minister of Trade is targeting an increase in Indonesia’s non-oil and gas exports to reach 7.5%.

According to Hafidz, to maintain the growth momentum, of course, the 7% target is not only a government ambition but also a necessity that Indonesia has to achieve in order to get out of the mid-income trap.

“7% growth can only be achieved with a scenario to re-grow the industry at least above GDP growth, meaning that if GDP growth is targeted at 7%, industry growth is at least 8-10%. This is because the industrial posture is in the range of 20% to the growth of 8-10% will provide an additional GDP posture of 1.6-2%. So that industry must absolutely be reorganized between those who are oriented towards import substitution (fulfillment of the domestic market) and export orientation”, stated Hafidz.

Seeing the current developments in which the industry has only grown in the range of 4%, it means that it is still necessary to work hard to spur growth 2-3 times faster. If it is simulated 7% GDP growth with 10% industrial growth will give birth to a composition of GDP posture growth of up to 26.37% in the 10th year. This is what will be realistic in pursuit of high non-oil export growth which is at least two digits consistent.

However, what kind of industry strengthening should be done by the Government of Indonesia, furthermore Hafidz stressed the importance of developing import substitution-based industries by strengthening supply chains based on local community products, especially in the Agro-industry sector (agriculture, plantation, forestry, etc.) and Marine Industry (fisheries and marine).

“At least the government’s initiative is needed to do two things; (1) Mapping potential links and matches of community production and development potential on an industrial scale, and, (2) Providing incentives to encourage industrial and small-medium business collaboration so as to ensure the connection of the people’s production chain. Both are in order to ensure that the plan of industrialization does not give birth to trade off on the basis of people’s livelihoods, explained Hafidz.

Another important factor according to Hafidz is ensuring the construction of the downstream industry, especially in the energy sector. This can be done by accelerating the realization of 6 new Pertamina refineries construction with adequate incentives for investors and optimizing the use of LNG. Both must also be prepared to support derivative industrial raw materials in order to have better competitiveness.

The strength of natural resources must be a key position for Indonesia in raising its bargaining position in global trade. Inevitably the restrictions on the export of raw materials must be done so that Indonesia can become a key player in globalization, said Hafidz **