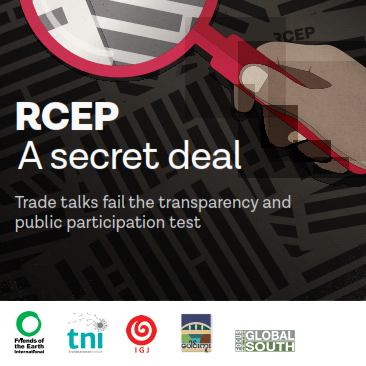 The Regional Comprehensive Economic Partnership (RCEP) is a mega regional trade deal involving sixteen nations from Asia-Pacific. RCEP will impact the lives of billions of people, from the quality of the food they eat to the energy they consume and the affordability of life-saving medicines. Yet, RCEP negotiations are being conducted almost completely in secret, with limited to no meaningful public participation. Most elected officials have, at best, limited access to the negotiating texts, which remain out of reach for civil society.

Programmes
Trade & Investment
The Regional Comprehensive Economic Partnership (RCEP) is currently being negotiated between 16 countries in the Asia and Pacific regions. It includes China, members of the Association of Southeast Asian Nations (ASEAN) and other key trading nations such as Australia, New Zealand, South Korea, Japan and India.

Over 50% of the world’s population lives in the countries party to RCEP, which account for over a quarter of global exports and almost 30% of the world’s GDP. Like other mega regional trade agreements, such as the Trans Pacific Partnership (TPP), RCEP negotiations are far-reaching, including trade and investment liberalisation, Intellectual Property Rights, services, competition policy and e-commerce. RCEP will impact on the lives of billions of people, from the quality of the food we eat to the energy we consume and the affordability of life-saving medicines.

Experts measured the RCEP negotiations against criteria for Transparency and Public Participation in policy making. The outcome was a resounding FAIL.

The report finds the RCEP negotiations to be:

• Non-transparent: negligible public availability of official information on the state of negations, a failure to release draft texts and adequate details of key government positions.

• Lacking in independent social, economic and environmental impact assessments, making it it particularly difficult for journalists to accurately report on the trade deal.

• Plagued by numerous examples of vested interests influencing the process, such as corporations holding privileged semi official role in negotiations

• Deprived of Asian parliaments and elected officials representation and input. They are frequently shut out, have no meaningful role in negotiations and often cannot access the text

• Devoid of public participation, which amounted to, at best, token or ad hoc stakeholder engagements.