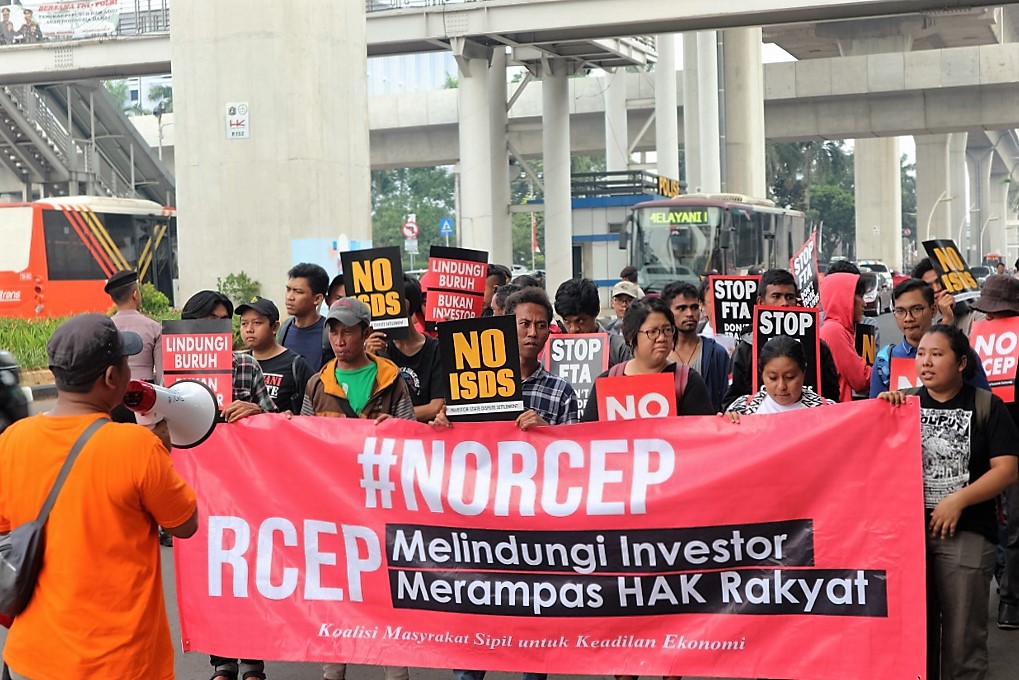 Jakarta, August 23, 2019. Civil society coalition for economic justice held a protest rejecting RCEP agreement that’s being negotiated by Indonesia. The coalition sees that RCEP provision will legalize the deprivation of people’s right over their economic justice and will aggressively provide protection and facilitate the freedom of investment and trade for corporations.

The RCEP Intersessional Negotiations is taking place this week from  23 to 25 August, in Jakarta, Indonesia. This negotiation is carried out to encourage acceleration of completion of RCEP negotiations by the end of 2019.

“There’s already a lot of evidences against state sovereignty due to free trade agreements. Indonesia have faced many lawsuits when the government  issued national regulations that are contrary to their market liberalization commitments with international trade agreements. The lawsuits at the WTO, including the ISDS lawsuits by foreign investors have shown the loss of government sovereignty over the interests of investors who have been facilitate under free trade agreements “, explained Rachmi Hertanti, Director of Indonesia for Global Justice (IGJ).

Rachmi further emphasized that RCEP and other free trade agreements not only discuss export and import tariffs. But it will also negotiate the principles of the treaty that will bind its member states to harmonize national regulations with higher level of liberalisation commitment. There are law enforcement and sanctions that will apply to member countries when they do not carry out their liberalization commitments. In the end, the country’s sovereignty is held hostage to the rules of free trade agreements which are certainly against the Constitution.

“Before signing on RCEP government need more than just calculating the potential increase of Indonesia’s exports, but also must calculate the impact to the loss of people’s rights due to the neglection of Constitutional mandate from the implementation of the agreement. In fact, commitment of market liberalization in the RCEP agreement will be contradict with  the decision of the Constitutional Court in the recent judicial review of several laws including Law on International Agreement, “Rachmi stressed.

Provisions on trade in services and investment stipulated in the RCEP will make impossible for the people to ensuring regulations that protect their rights and livelihood. Specifically, the investment dispute mechanism between investors and the state regulated in RCEP will bind the government to keep regulations that are pro-investor rather than pro-people.

In addition, the provision on ‘standstill’ and ‘ratchet’ mechanism in both RCEP service and investment chapter will be a threat to the protection of people’s rights. The provision of “standstill” implies that RCEP member countries will later be obliged to the maximum extent possible to be consistent with their current domestic regulations and prohibited from changing policies or issuing new regulations that are not in accordance with the contents of the agreement.

“If RCEP rules are take into force it will be very difficult to expect laws which are pro-people. Particularly because in order to attract investment, the government already plans to amend various laws to expedite investments, including: Mining Bill, Water Resources Bill, Land Bill, Labor Bill, and others. This is in line with the RCEP liberalization agenda, “said Arieska Kurniawati from Solidaritas Perempuan.

There was no discussion about people’s rights in the RCEP negotiations. It is only discuss about investor rights. The government solely invited investment but forgot about the conditions of labors in Indonesia whose rights often violated by foreign investors.

“There is no law enforcement from the government against investors who violate labor rights in Indonesia. In the RCEP negotiations, there was no discussion to ensure RCEP member countries to resolve cases of labor rights violations like what happen in Indonesia  with South Korean investors. Where is the responsibility of the Indonesian government for fulfilling labor rights violated by investors? “, argue Herman Abdulrohman, chair of Kesatuan Perjuangan Rakyat (KPR).

Most of international trade and investment agreements, either the one that’s still being negotiated such as RCEP and those that already being signed, have never been disclosed to the public, including commitments on economic liberalization undertaken by the Government. In fact, the consultation process was not open to the public, so it is difficult for the people to be actively raised their concerns and providing input to policy makers.

“The negotiation process is very undemocratic. Not only in the negotiation process, but even among the Indonesian Parliament which will ratify this agreement has never open or invite civil society to take part in giving an analysis of the impact of the international trade and investment agreement “, stressed Susan Herawati, Secretary General of KIARA.

The Decision of the Constitutional Court No.13/PUU-XVI/2018 has reaffirmed that any international agreements that have wide impact requires people’s approval. This is to ensure protection of people’s rights from the negative impacts arising from free trade and investment agreements. Therefore, the Indonesia Government and Parliament must open the information or texts of the negotiations and involving the people widely in the consultation process to get views on their concerns regarding impact of the agreement.***