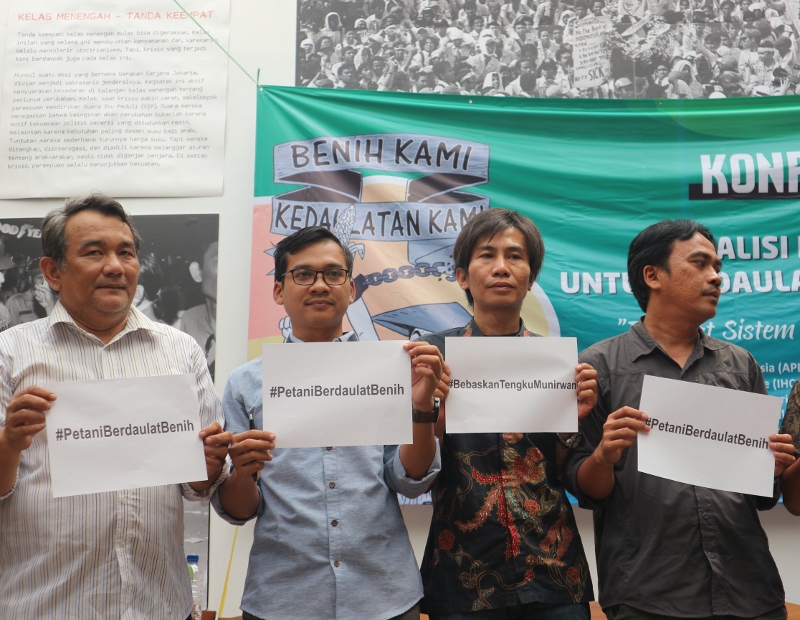 Jakarta, 14th August 2019. The government of Indonesian is aggressively increasing the negotiation of international trade agreements governing seed patents for corporations. In fact, the criminalization of corn breeders in East Java in 2005 is still traumatizing. A similar practice of criminalization is happened again to a farmer in North Aceh Regency this year.

The criminalization case was caused by the regulation of seed patent protection which adopted from the WTO agreement. The regulation restricts farmers to breed, grow, and distribute the seeds that they produce.

Currently, the Government of Indonesia plans to ratify the free trade agreement which contain the same rules. The plan for ratification was carried out against the Indonesia-EFTA Agreement (Switzerland, Norway, Iceland, Liechtenstein) CEPA. Responding to this situation Indonesia for Global Justice (IGJ) together with the People’s Coalition for Food Sovereignty (KRKP) and BEM KM IPB held a discussion on Thursday, July 4th, 2019 at the Bogor Institute of Agriculture Campus, to discuss the impact of the agreement on farmers’ rights over seeds.

Indonesia ratified the WTO Agreement in 1995. The agreement contained provisions to liberalize trade and investment, both related to goods and services. However, on the contrary, the WTO agreement also has provisions that would like to limit the freedom in technology control, namely rule on the protection of intellectual property rights, or known as Trade-Related Intellectual Property Rights (TRIPs). This rule is not consistent with the idea of ‘free trade’.

The TRIPs regulation is the result of multinational companies’ lobby in developed countries that have a strong control on technology, one of which is the multinationals on seed, pesticide, and fertilizer. TRIPS regulates the obligations of WTO member to provide protection for knowledge, innovation, and technology through the protection of copyright, trademark, industrial designs, patents, and geographical indications.

Related to the issue of seeds, the rule of protection are regulated through patent protection. In Article 27 paragraph (3.b) TRIPS regulates on the obligation of WTO member to provide protection over plant varieties either through patents or with an effective sui generis system or with a combination of both. Patent protection of seeds has given the patent holder the right to monopolize seeds for 20 years.

Since then, in order to fulfill the obligations in the TRIPS agreement, many developing countries, including Indonesia, adopted the UPOV convention rules to draft laws for the plant varieties protection. Plant varieties Protection has been regulated in Law No.29 year 2000. As a result, since 1995, UPOV membership has increased from 27 to 72 countries. However, some countries such as Egypt, India, Malaysia, and Thailand still refuse to refer to UPOV and prefer to use the sui generis system to provide protection for plant varieties in their countries.

Currently, the encouragement of some developed countries for Indonesia to ratify the UPOV Convention is getting stronger. Moreover, they want to regulate the obligation to ratify the UPOV Convention in several free trade negotiations conducted by Indonesia. For sure this provision will benefit developed countries rather than Indonesia. Agreements that are being negotiated such as the Indonesia-EU CEPA, ASEAN RCEP, and Indonesia-Japan CEPA.

Furthermore, Hanim conveyed, that Indonesia had signed the Indonesia-EFTA (European Free Trade Association) agreement in 2018. The agreement contained a trap article. The patent provisions in the agreement, especially in the Annex to the intellectual property rights chapter, have problematic interpretation. It said that for countries that are not yet members of UPOV 1978 they must adjust their laws to UPOV 1991. However, conversely, for countries that are already members of UPOV 1978 (such as Switzerland and Norway ) are not required to adjust their laws to the UPOV 1991 rules.

If so, then the implementation of the regulations in the Indonesia-EFTA CEPA has created injustice for Indonesia. This is because Indonesia is not a member of UPOV Convention. Therefore, the obligation under IEFTA is to adjust Indonesia’s law to UPOV 1991 which has higher seed protection standards than UPOV 1978. So that Switzerland and Norway are more advantaged in this regard.

Hanim also expressed that so far, Indonesia has not ratified the UPOV Convention. Nevertheless, Law No.29 year 2000 adopted many of its regulations. However, revising the law will be easier than revising the FTA agreement. So that the Government of Indonesia must stop negotiating and ratifying the FTA which regulates patent protection for seeds, especially those requiring Indonesia to become a UPOV member country.

Who Will Be Benefited?

It is inevitable, that the corporation took piggybacking behind the provisions of UPOV. Because, control of the world’s largest seed by multinational companies which already monopolize the seed, among others; Monsanto, Syngenta, Dupon, Bayer, Dow, BASF, ChemChina. (see table 1). And some of them have become the largest seed companies in Indonesia (See table 2).

Why are corporations get the benefit? Because UPOV standards provide flexibility for corporations to privatize seeds and distribute the seeds to farmers. This will make the farmers’ dependence on corporate seeds. In addition, provisions in UPOV also make it impossible for farmers to manage and use their local seeds. The space for farmers in the use of seeds will be more cramped. In fact, when using or distributing the seeds that have not been certified may be subject to penal sanctions. If so, seed companies will benefit from the implementation of the UPOV provisions.

Kartini Samon, researcher from GRAIN, explained that UPOV is detrimental to small farmers (peasant) because, first, it prohibits limiting the storage and exchange of privatized seeds, second, it can criminalize farmers who violate seed patents, third, it can cause the biodiversity erosion, fourth, cause the dependence and monopoly the seed industry and encourage the commercialization of seeds.

In fact, the ability and farmers’ right to save and develop seeds from one planting season to the next planting season is the key to the food biodiversity. With UPOV regulation, it has been ensured that the uniformity of seeds by corporations has eliminated world biodiversity. Yet in practice in the last 50 years since the Green Revolution, small farmers around the world have donated 2.1 million varieties of plants to various seed banks (gene banks). In the same period, the seed company only donated 80,000 varieties[1].

Even though UPOV regulations, companies such as Monsanto-Bayer, Dow-DuPont (Corteva), Syngenta-ChemChina and BASF (top 4 = 2 / 3rds of global seed market) want to make farmers’ rights to save and exchange the seeds to be illegal, so farmers must buy in every planting season. This is the ultimately made farmers become dependent on industrial seeds, and lose their sovereignty over seeds. Of course, this is also a threat to food sovereignty in Indonesia.

On July 22nd, 2019, the criminalization case happened to Mr. Tengku Munirwan, a breeder farmer and Village Head of Meunasah Rayeuk, North Aceh District. He was arrested by the Aceh Regional Police for his alleged distribution of IF8 seeds without labels to fellow farmer groups. The total number of IF8 seeds distributed in 2018 was 118 kg, distributed in 14 Sub-Districts and 134 Villages in North Aceh District. In fact, the seed IF8 has received recognition from the North Aceh District Government through Rural Innovation Exchange in 2018. Since, IF8 seed considered qualified than the other seeds, for example in Meunasah Rayeuk, it could generate as much as 11.9 tons of rice per hectare from IF8 seed, and the achievements, and it has never been achieved before by another seed.

However, soon enough the situation is inversely proportional. Knowing that there is a distribution of seeds without a label, the Department of Agriculture and Plantation of Aceh Province issued Circular Number: 510/796/2019 dated May 15, 2019, concerning the Prohibition of Seed Distribution without Label. Then, this circular letter was followed up by the North Aceh District Agriculture and Plantation Office by issuing Letter Number 521/885/2019. Finally, IF8 seed distribution is not allowed to be distributed to farmers because it has not been certified. Because considered to violate the provisions of Article 12 of Law No. 12 year 1992 concerning the Plant Cultivation Systems. Until now, the case of Mr. Tengku Munirwan is still ongoing and he’s detention has been suspended.

In fact, Mr. Tengku Munirwan should be released unconditionally. Because, Article 12 Paragraph (1) and (2) that is used to ensnare him, has been declared contrary to the constitution. The Constitutional Court has recognized the farmers’ rights in Constitutional Court Decision No. 99 / PUU-X / 2012 which confirms that the distribution of breeding results must first be released by the Government does not apply to the results of plant breeding carried out by domestic small farmers for their groups.

On July 18th, 2013, the Constitutional Court issued a decision on a civil society group’s lawsuit against Law No.12 year 1992 concerning Plant Cultivation Systems. The lawsuit was carried out due to the implementation of the law has eliminated farmers’ sovereignty over seeds. Farmers cannot carry out breeding and germplasm collection for their agricultural needs. In fact, criminalization against farmers often occurs due to the law.

The effect of the Constitutional Court’s Decision is farmers can be free to develop seeds independently without having a legal entity and the obligation to get permission from the government. Now, a new norm changes after the verdict and it says: ‘Except for individual small farmers’ so that the words of the verse now becomes,” The germplasm collection and gathering activities as referred in paragraph (2), can be carried out by individuals or legal entities based on permits except for individual small farmers. “

Farmers Must Be Sovereign over Seeds

Farmers represent the subjects in all matters relating to agriculture. Because the main actor which doing all agricultural activities is the farmers themselves. However, Prof. Andreas  Santosa, as one of the resource person, stated that most of the laws concerning seeds are oriented to changing farmers from sources of seed into the seed consumers, because the seed has been supplied by seed companies.

UPOV Roadmap Study by the Government

Head of Plant Variety Protection at the Ministry of Agriculture, Prof. Eriza Jamal, stated that the Government of Indonesia in ratifying every international treaty are often did not conduct a prior study of the positive and negative impacts.

The Ministry of Agriculture admitted that in the FTA negotiations the dominance of developed countries such as Japan continued to urge Indonesia to become a member of UPOV. Not only in FTA negotiations, but Japan also held several meetings directly by inviting ASEAN countries including Indonesia to attend the East Asia Plant Variety Protection Forum, in that forum Japan encouraged Indonesia to become a member of UPOV and harmonize regulations to comply with UPOV provisions.

The government claims in its study of the UPOV road map will prioritize the farmer’s rights. They admitted that it was still difficult to answer the debate between granting rights to individual breeders (Breeder Rights) and protecting the farmers’ rights (Farmers Rights). For the government, the challenge is how to accommodate two sharply different sides of interests.

Regarding the development of the domestic seed industry, a big critic was conveyed by Kartini Samon. She highlighted that the domestic seed industry could not be possible. This is because the control of the seed industry in Indonesia is still dominated by multinational seed companies. The UPOV road map will also be a backlash against farmers. This is because there is no firm commitment from the Government of Indonesia to encourage the existence of a seed law in favor of small farmers and abolish the regulation of criminalization against farmers.

The sustainability of Indonesian agriculture and the sovereignty of farmers over seeds must continue to be embodied. Therefore, it must be encouraged jointly by farmer groups, academics, and other elements of the community in guarding and providing input to the Government in order to protect the farmers’ rights and local seeds. In addition, actualizing the agenda of farmers’ sovereignty over seeds is more important than the government negotiating the FTA agreement, because it will only castrate the farmers’ rights.