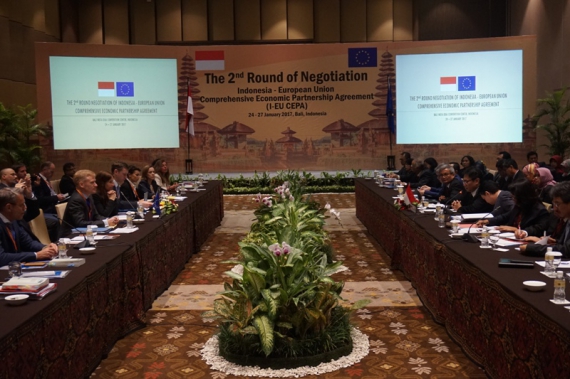 Today, over 20 representatives from civil society organisations from the Indonesia and the European union, had a long meeting with negotiators of the new trade agreement between the EU and Indonesia (CEPA – Comprehensive Economic Partnership Agreement). They gave a joint civil society statement (attached) to negotiators, urged them to put people and the planet first in the future agreement, and asked to participate more.

Organisations present in the meeting welcomed the commitment of the Indonesian delegation to continue consulting civil society regarding the CEPA negotiations.

Meanwhile, demonstrators were expressing their discontent about the agreement in front of the negotiation venue.

In the meeting, civil society representatives expressed their concerns about the future deal, which could create a parallel justice system for foreign investors, damage access to medicines, and increase pressure on workers and the environment.

Marc Maes from 11.11.11 comments “The EU is still proposing to create a parallel justice system for investors, in the future EU-Indonesia trade deal. This is unacceptable. We call on the Indonesian government to resist EU pressures, and to stop giving privileges to multinational corporations. This type of mechanism has already cost too much to Indonesia and its people.”

Rachmi Hertanti from Indonesia for Global Justice says “Indonesia has already been sued by foreign investors 8 times using this type of mechanisms, which cost billions of rupiah to the state. And, we believed that the investment chapter under IEU CEPA with the rights to investor to sue the state or including investment court system (ICS) proposed by the EU, will be only a setback for the progressive BITs  review process undertaken by the Government of Indonesia since 2012”.

Organisations present in the meeting also expressed concerns about access to medicines :

Sindi Putri from Indonesia AIDS Coalition said “Despite rhetoric reassurances, negotiators from the EU confirmed that their are proposing changes that will be harmful to people’s access to medecines in Indonesia. We urge the Indonesian government and indonesian negotiators to refuse any provision increasing the cost of medicine. Don’t trade away our lives !”

Nicole Mathot from CNV Internationaal says “We note that both the Indonesian and the EU delegation reconfirmed their full commitment to the respect and implementation of ILO (International Labour Organisation) standards. It is a positive signal.”

Sulistri from KSBSI says “The agreement must include monitoring and a complain mechanism accessible to trade unions and other stakeholders, in case of violation of core labour standards.”

Negotiators insisted on the sustainable development chapter of the future CEPA, but civil society representatives asked more than promises. Palm oil was at the center of the discussion.

Yuyun Harmono from WALHI/Friends of the Earth Indonesia said “Palm oil is a key commodity in trade between Indonesia and the EU. It is responsible for enormous environmental problems, land grabbing, conflicts with local communities and human rights violations. Palm oil should be discussed outside CEPA. As long as problems are not solved, there should be a moratorium on new palm oil concessions”.

Paul de Clerck from Friends of the Earth Europe adds “Indonesia is asking for full market access for palm oil that complies with its ISPO certification scheme. That scheme has been ineffective in addressing the problems. Canceling existing tariffs for palm oil will only increase human rights violations. We urge the European Commission not to give in to that.”

In the meeting, EU representatives acknowleged that CEPA ‘might not be the most appropiate framework to adress palm oil’.

Susan Herawati says “While they come from good intentions, sustainable development chapters in EU trade agreements are usually weak, and do not improve the situation on the ground. The rest of the agreements increase pressure on farmers, fishers, workers and the environment, which has a negative effect”.