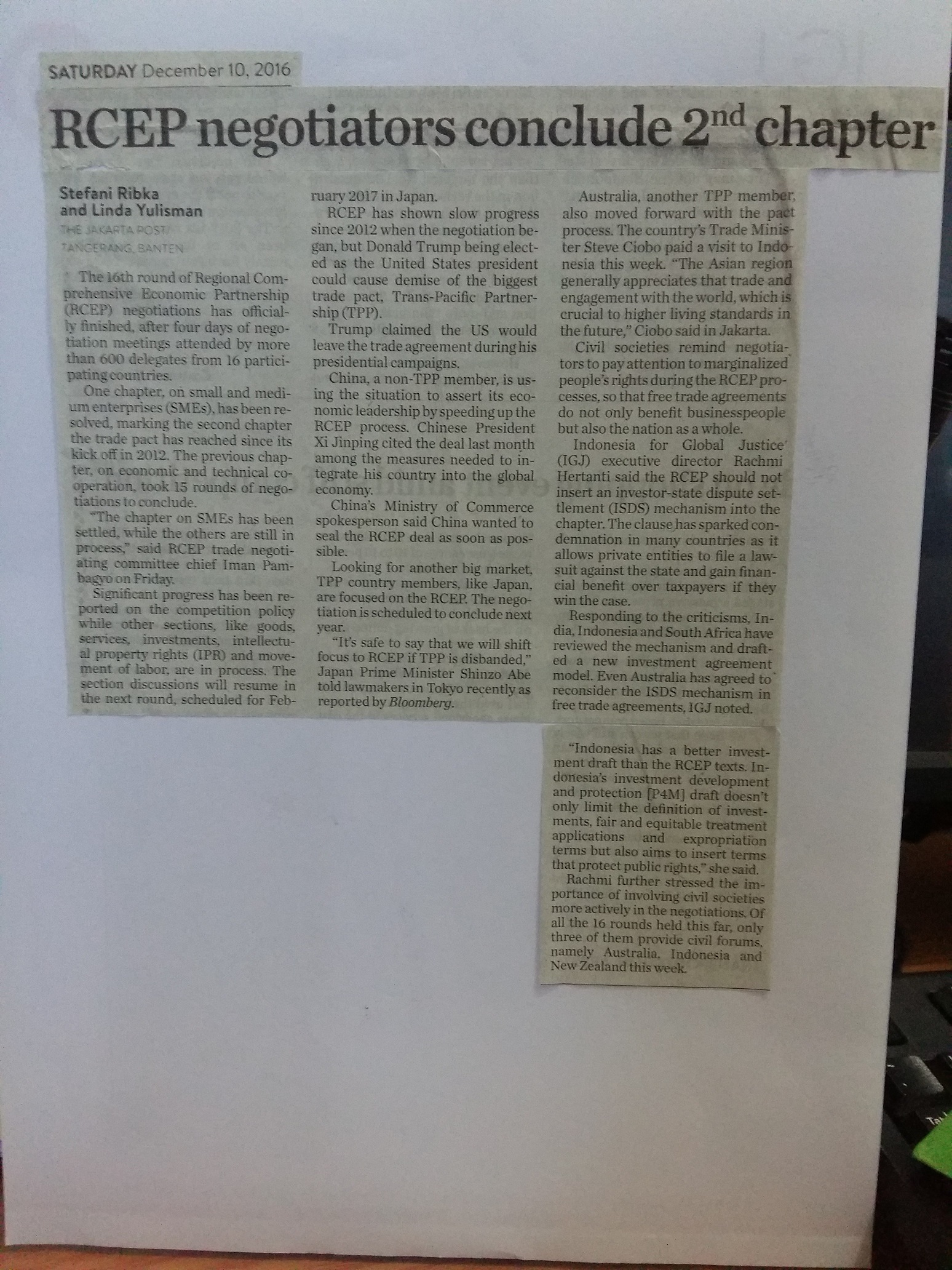 The Jakarta Post – The 16th round of Regional Comprehensive Economic Partnership (RCEP) negotiations has officially finished, after four days of negotiation meetings attended by more than 600 delegates from 16 participating countries.

One chapter, on small and medium enterprises (SMEs), has been resolved, marking the second chapter the trade pact has reached since its kick off in 2012. The previous chapter, on economic and technical cooperation, took 15 rounds of negotiations to conclude.

“The chapter on SMEs has been settled, while the others are still in process,” said RCEP trade negotiating committee chief Iman Pambagyo on Friday.

Significant progress has been reported on the competition policy while other sections, like goods, services, investments, intellectual property rights (IPR) and movement of labor, are in process. The section discussions will resume in the next round, scheduled for February 2017 in Japan.

RCEP has shown slow progress since 2012 when the negotiation began, but Donald Trump being elected as the United States president could cause demise of the biggest trade pact, Trans-Pacific Partnership (TPP).

Trump claimed the US would leave the trade agreement during his presidential campaigns.

China, a non-TPP member, is using the situation to assert its economic leadership by speeding up the RCEP process. Chinese President Xi Jinping cited the deal last month among the measures needed to integrate his country into the global economy.

Looking for another big market, TPP country members, like Japan, are focused on the RCEP. The negotiation is scheduled to conclude next year.

“It’s safe to say that we will shift focus to RCEP if TPP is disbanded,” Japan Prime Minister Shinzo Abe told lawmakers in Tokyo recently as reported by Bloomberg.

Australia, another TPP member, also moved forward with the pact process. The country’s Trade Minister Steve Ciobo paid a visit to Indonesia this week. “The Asian region generally appreciates that trade and engagement with the world, which is crucial to higher living standards in the future,” Ciobo said in Jakarta.

Civil societies remind negotiators to pay attention to marginalized people’s rights during the RCEP processes, so that free trade agreements do not only benefit business people but also the nation as a whole.

Indonesia for Global Justice (IGJ) executive director Rachmi Hertanti said the RCEP should not insert an investor-state dispute settlement (ISDS) mechanism into the chapter. The clause has sparked condemnation in many countries as it allows private entities to file a lawsuit against the state and gain financial benefit over taxpayers if they win the case.

Responding to the criticisms, India, Indonesia and South Africa have reviewed the mechanism and drafted a new investment agreement model. Even Australia has agreed to reconsider the ISDS mechanism in free trade agreements, IGJ noted.

“Indonesia has a better investment draft than the RCEP texts. Indonesia’s investment development and protection [P4M] draft doesn’t only limit the definition of investments, fair and equitable treatment applications and expropriation terms but also aims to insert terms that protect public rights,” she said.

Rachmi further stressed the importance of involving civil societies more actively in the negotiations. Of all the 16 rounds held this far, only three of them provide civil forums, namely Australia, Indonesia and New Zealand this week.

Report on the first session of the open-ended intergovernmental working group on transnational corporations and other business enterprises with respect to human rights, with the mandate of elaborating an international legally binding instrument