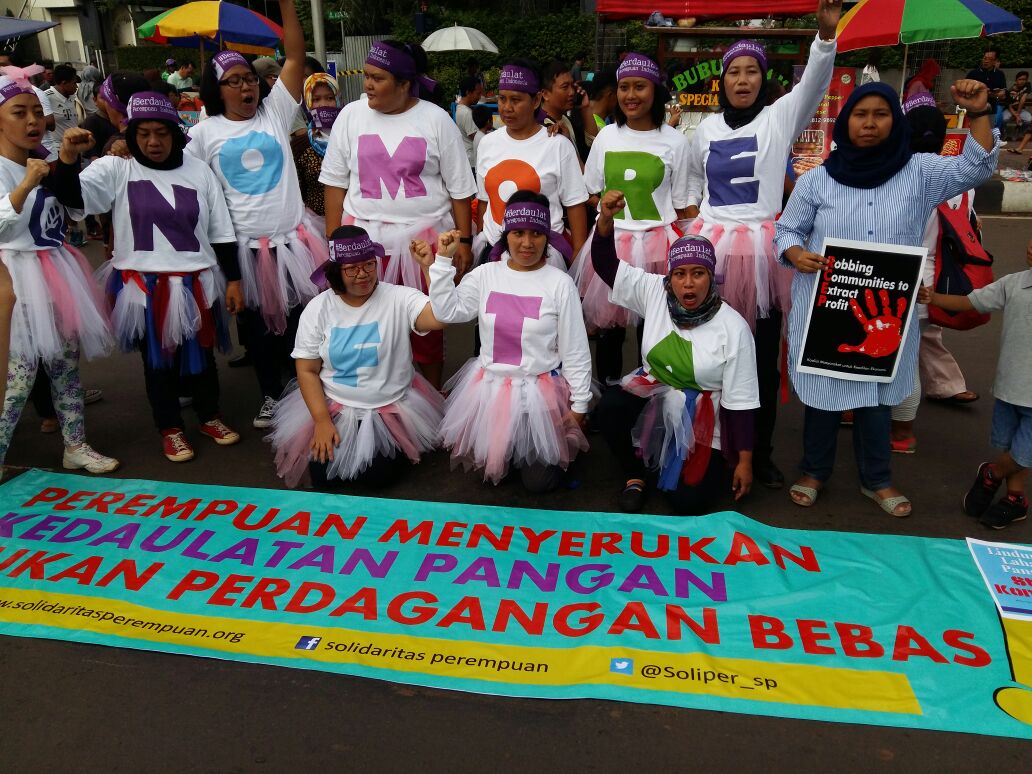 Jakarta October 16th 2016. Coinciding with the commemoration of World Food Day, which falls on Sunday (10/16/16), the Civil Society Coalition for Economic Justice carry out various series of actions to criticize the policies of Indonesian international economic diplomacy, particularly related to the ASEAN-RCEP negotiations that will take place in Tianjin, China on October 17th to October 21st, 2016.

The action begins by a Flash Mob with the theme: “Food Day, Let’s Move for Food Sovereignty” by utilizing the Car Free Day public space in Jakarta.

The Flash Mob was joined by the Coalition members such as Women’s Solidarity, IGJ, API, and Chrysanthemum. The event starts at 6 am Area UOB building, Jl. MH. Thamrin, which was commemorated with a long walk under the message “Food Sovereignty, Not Free Trade”. The action was topped off with a press conference at Anomali Cafe, Menteng, Central Jakarta (releases can be found on – https://igj.or.id/press-release-coalition-for-economic-justice-responding-world-food-day-october-16th-2016/?lang=en).

The series of actions aimed to urge the government to be serious in strengthening food sovereignty for farmers and to ensure the protection of rights for food access of the society from the threat of FTA, especially RCEP. One of the critics coming from the Coalition over RCEP ASEAN agreement is related to the issue of food and protection of intellectual property rights provisions that will affect farmers’ seed sovereignty in Indonesia.

If Indonesia were to accede to this Agreement, it will only strengthen the monopolistic control of seed by big corporations with major implications for the fulfillment of the right food for the wider community. This is because the RCEP Treaty enforces its member states joined the UPOV 1991 which is full of monopolistic interests of big corporates over seeds. UPOV 1991 prohibits the right of farmers to develop their seeds on the basis of infringement of intellectual property rights. Whereas 90% of seed trafficking has been mastered only by five multinational corporations.

This agreement is nothing but a corporate ambition to strengthen its dominance and even eliminate the role of the state to meet its obligations to strengthen food sovereignty. Liberalization scheme as we know them, will always ended up making us dependent on foreign food products.

The Coalition assess that this FTA arrangement will bring a broader impact on public policies, particularly in regards of food policy and farmers’ sovereignty. Therefore, it is imperative to urge the government to reassess the impact of liberalization on food through any FTAs, including RCEP. In fact these agreements do not only affect the study of economics, but they also affect the fulfillment and protection of human rights, especially in the aspect of the rights to economic, social, and culture.

Civil Society Coalition for Economic Justice is consisted of: