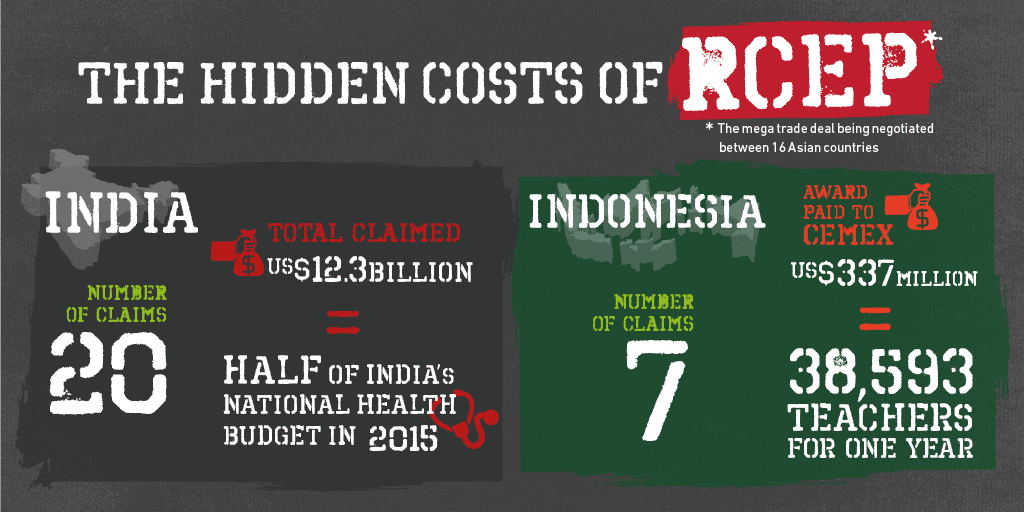 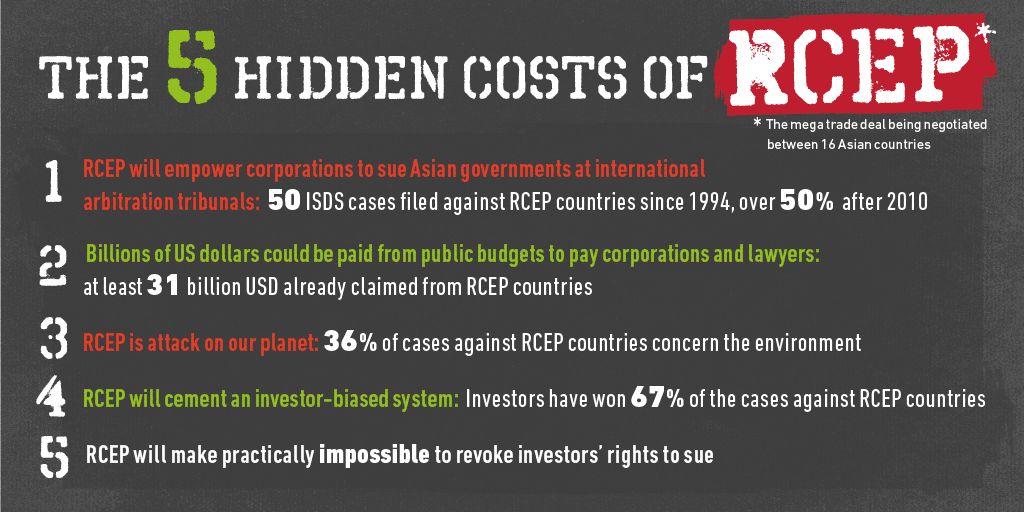 Jakarta, December 8th The Regional Comprehensive Economic Partnership (RCEP) is being negotiated in Jakarta, Indonesia this week (December 2-10) [1]. If signed, RCEP would grant corporations the exclusive right to bypass domestic legal systems and sue governments at international tribunals whenever they feel government regulation can limit their profits [2].

New research reveals that investors have launched 50 lawsuits at secret international arbitration tribunals against governments negotiating the RCEP agreement for at least $31 billion US dollars.

The report by The Transnational Institute (TNI), Friends of the Earth International (FOEI), Indonesia for Global Justice (IGJ), Focus on the Global South and Paung Ku exposes a growing wave of corporate lawsuits against Asian countries, which could lead to a drain in public budgets of millions of US dollars and undermine governments’ rights to regulate in the public interest.

The research shows the largest known amount paid to a foreign investor by an RCEP country is $337 million USD as part of the settlement in the Cemex versus Indonesia case, which is equivalent to 38,593 Indonesian teachers’ salaries for one year. Environment-related laws and sectors account for 36% of cases recorded.

Speaking about the findings, Sam Cossar-Gilbert trade campaigner at Friends of the Earth International, said: “The secrecy surrounding investor-state arbitration means these figures could be just the tip of the iceberg. The huge sums of money involved leave no doubt about the unacceptable burden that this dangerous mechanism puts on countries across Asia. If the RCEP trade deal goes ahead as planned, we expect to see an increase in multi-billion dollar claims – and citizens being forced to foot the bill.”

The report argues that these lawsuits provide a warning of the potential high costs of the proposed RCEP trade deal. RCEP will deepen the rights of investors and lock in place this system of privatized justice. Governments will find it much more difficult to withdraw their commitments to the rights accorded to foreign investors in RCEP than in Bilateral Investment Treaties, because they would need to put an end to the whole agreement and not just the sections on investors’ rights.

“Investors are already using investment agreements to raid cash-strapped public budgets in Asia. Granting corporations the same excessive rights in the even more far-reaching RCEP trade deal would be political madness. It is time to reject a privatised justice system that can undermine crucial regulation in the public interest”, said Cecilia Olivet, researcher at the Transnational Institute.

There is growing opposition to far-reaching investment protection across the Asian region and globally. This week 316 Civil Society Organisations presented a joint letter to RCEP governments [3] urging them to exclude investor-to-state dispute settlement provisions from the
deal and demanding instead a new trade model that helps to develop sustainable societies, by supporting local economies, workers’ rights and food sovereignty.

Here you can find the report: http://www.foei.org/resources/publications/hidden-costs-rcep-corporate-trade-deals-asia

References:
1. The mega trade deal will affect over 50% of the world’s population and includes China, members of the Association of Southeast Asian Nations (ASEAN) and other key trading nations such as Australia, South Korea, Japan, India and New Zealand.
2. http://www.bilaterals.org/?rcep-draft-investment-chapter
3. http://www.bilaterals.org/?civil-society-open-letter-to 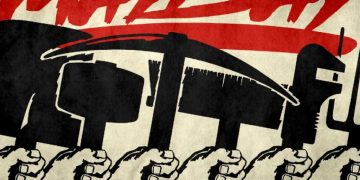